DeKalb Baseball Season comes to an End in Sweet 16 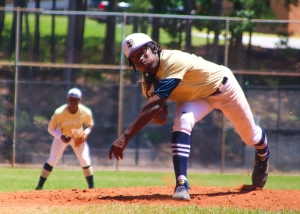 The 2019 DeKalb County baseball season came to an end on Thursday as Southwest DeKalb and Redan lost their playoff series to be eliminated.

Southwest DeKalb (18-6) had won its first playoff series in 41 years last week with a sweep of Clarke Central fell in two games to Riverwood (25-4) in front of the home fans.

Riverwood took advantage of six Panthers’ errors in the opener to score 11 runs on nine hits. An error in the top of the second inning led to four runs for Riverwood.

The Raiders would never look back as they rolled out to an 11-1 lead heading into the bottom of the seventh.

Southwest DeKalb got a two-run single by Sadir Ryan and an RBI single by Juston Jordan to put three runs up in the seventh, but left the bases loaded as Riverwood closed out the game.

The second game of the doubleheader in the Class 5A playoff series was shortened to three innings as Riverwood took advantage of four more errors on the way to an 11-0 advantage after two innings. Riverwood finished the game out with four runs in the third.

Redan fought to the end but came up short in a 4-3 loss to Fannin County on Thursday.

After pulling out a 7-6, 11-inning thriller in the second game of the doubleheader on Wednesday to prolong the series the Raiders fell behind 4-1 early in the deciding third game.

Redan pulled within 4-3 before Fannin County was able to close the door for the win.