Dunwoody Lacrosse Seniors Excelled on and off the Field 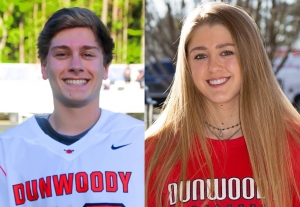 Dunwoody lacrosse seniors (l-r) Sean Fox and Phoebe Ringers give back to the community in more than athletics.

Over the last four years Dunwoody senior lacrosse players Sean Fox and Phoebe Ringers were the cornerstones of the two Wildcat programs leading by example both on and off the field of play.

Both athletes had a parent who played lacrosse in college and this influence brought the pair into the game at a young age despite growing up in an area where lacrosse was not a big sport for kids growing up.

Fox’s mother, Jodie Fox, played at the University of Delaware and was a big influence in her son’s growing to love the sport he plays and gives back to all year long. His father, Jim Fox, also helps coach the Wildcats.

He has 205 points (106 goals, 99 assists) for his career which is a team record and he has at least one game left as the Wildcats travel to Cobb County to take on No. 1 seed Harrison (May 2) in the first round of the Class 6A/7A state playoffs. It is the Wildcats second consecutive playoff berth. He also has well over 100 ground balls for his career with his defensive play.

Giving back to his sport and the future of Dunwoody lacrosse after he heads to Connecticut College next fall to continue his playing career and education is a big part of what he does. He has spent at least six hours on Saturdays the last five years teaching and refereeing lacrosse to kids ranging from kindergarten to eighth grade as part of the Atlanta Youth Lacrosse League. 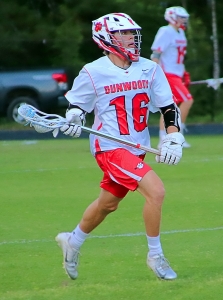 Dunwoody’s Sean Fox on the move against North Springs. (Photo by Mark Brock)

“I’ve volunteered for several years at Atlanta Youth Lacrosse teaching the younger kids the game along with what sportsmanship is and how to apply that to the game as well as life,” said Fox. “Refereeing their games I get to have the best day running around and laughing with them and see them smile from ear-to-ear enjoying the game I love.”

He puts on his volunteer coaching hat for the Junior Wildcats lacrosse program as well as part of helping to grow his sport in the Dunwoody area.

“He has basically built the program from little league on up,” said Mike Nash, his lacrosse coach this season as well as football the past two years. “He is one of those rare kids gets that just gets it. It is not just about the team last year or this year, but about the program going forward.”

Ringers lacrosse influence came from her father, Neal Ringers, who played at Ohio Wesleyan and professionally with the Boston Blazers.

The past four seasons have been productive on the field for the senior as she has compiled a school record 220 goals and 261 points as well as over 100 ground balls. She helped lead Dunwoody to a DeKalb County girls’ first playoff appearance in 2017 and the team came up just one win short of returning for a third time this season.

“I would like to thank my parents (Neal and Suzanne Ringers) for pushing me to join the Dunwoody lacrosse team,” said Ringers. “It was the first organized lacrosse league for me to play in, but I always had a stick in my since I was little.”

Giving back to the community through lacrosse is also high on Ringers’ list as she puts on clinics for kids ages 6 to 12 in her front yard.

“The past two years over the summers and weekends we teach the kids about the fundamentals of the game such as catching, passing, defending and field awareness,” said Ringers. 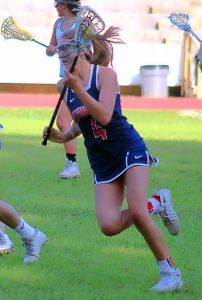 “I’ve worked with Phoebe the last two and a half years and she has always been a player you could count on during the season and the offseason,” said Dunwoody girls’ lacrosse coach Montez Swinney. “She has always remained humble and is a great asset to the team and to the community with her hard work on and off the field.

Sports is not the only thing important to Fox as he gives back through the Dunwoody National Honor Society volunteering six hours a month to help teachers at Kingsley and Chestnut Elementary Schools tutor the students in reading, math or whatever other help they may need

“We go in and do whatever the teacher needs help with during class,” said Fox. “Be it reading with the kids or helping with math.”

He has also volunteered for the past six years with the Vizsla Dog Club of Atlanta raising money for dog rescue and putting on events. This also includes helping put on National Dog Field Trials in Perry, Georgia during the spring and fall.

Since her freshman year Ringers has been involved with the Dunwoody High School Habitat for Humanity helping build homes.

“We’ve helped on two to three builds a year,” Ringers said. “It is a great joy going out with friends and helping someone get a new home.”

And despite all this time dedicated to sports and giving back to their communities the two seniors are excellent students and are preparing to further their educations next fall as they move on to another chapter in their lives.

He heads to Connecticut with plans for a degree in business and economics while also playing lacrosse on scholarship.

Ringers has maintained a 3.7 GPA and will attend the University of Alabama where she intends to major in nursing or psychology. She also hopes to join the Alabama club lacrosse team to continue her playing career.