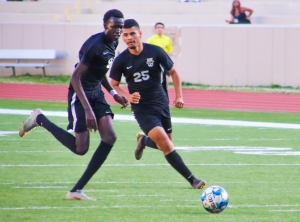 Tucker’s Chol Chol (8) and teammate Carlos Castro (25) cross each other’s path during first half action of their 1-0 win over No. 10 Greenbrier on Thursday night. (Photo by Mark Brock)

Boys soccer is alive and well in DeKalb County as four teams pick up victories to move into the quarterfinals of their respective state playoffs on Thursday night.

The No. 5 Tucker Tigers scored just one time, but a couple of big saves late by goalie David Magala helped preserve a 1-0 win against No. 10 Greenbrier at Hallford Stadium.

Both teams took some big swings in the first half as both goalies made a save in the first 37:26 of the game as the score remained tied at 0-0.

The Tigers then struck for the lone goal of the game as Steven Bawi lifted a pass downfield to Chol Chol running down the middle and past a pair of defenders. Chol faked left and then shot right into the corner of the goal to make it 1-0 in favor of the Tigers (16-2-2).

Magala came up with another big save less than a minute into the second half as Greenbrier got deep into the Tucker zone to get off a shot towards the right corner of the goal Magala dove and stretched out to bat the ball away to keep the lead at 1-0.

The Greenbrier goalie returned serve as he gobbled up a Tucker shot attempt with 27:20 to play to keep his team within one goal of tying the game.

Tucker appeared to score an insurance goal with 26:00 left in the game, but Christopher Duron’s shot into the goal was disallowed by an offsides call to keep the game at a one-goal difference.

Greenbrier almost tied the game once again but Magala came up big on the play by hauling in the lose ball with 14:00 minutes left on the clock.

Tucker was able to keep most of the action during the final 14 minutes in the Greenbrier zone as the clock ran down to zero sealing the win.

Class 7A
The No. 3 ranked Lakeside Vikings advanced to the Class 7A quarterfinals via 3-0 shutout of Forsyth Central at Adams Stadium on Thursday.

It is the second consecutive shutout for the Vikings (16-1-3) and goalie Andrew Seybolt. The Viking went into the half up 1-0 and put two more goals on the board in the second half to close out the win.

Lakeside will host Kennesaw Mountain (15-5-0) next Wednesday, May 8 at Adams Stadium with a time to be announced.

Class 5A
The No. 2 Cross Keys Indians advanced to the Class 5A quarterfinals with a 2-1 win over No. 9 Lithia Springs n a hard-fought tussle at North DeKalb Stadium on Thursday night.

The Indians (16-2-0) led 1-0 at the half only to have Lithia Springs knot the game at 1-1 early in the second half. The Indians then scored late in the game to secure the 2-1 victory.

Cross Keys advances to take on No. 1 Starr’s Mill (17-2-1) next Wednesday with kickoff set for 7:00 pm at North DeKalb Stadium.

Rome jumped out to a quick 2-0 lead and held a 4-0 lead before the Angoras began to rally. Clarkston managed two second half goals, but could not overcome the early deficit.

Class 4A
Druid Hills marched into the Class 4A quarterfinals for the third consecutive season by traveling to August and knocking off The Academy of Richmond 4-0 on Thursday night.