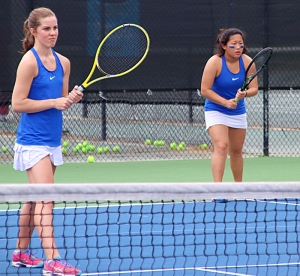 Chamblee’s No. 1 doubles team of Madeline Meer and Madison Trinh lead the Lady Bulldogs into the Class 5A semifinals against Carrollton. (Photo by Mark Brock)

The 2019 GHSA Tennis State Playoffs are in the semifinals with three DeKalb County squads vying for a coveted spot in the state finals in Rome on Saturday as they hit the courts on Tuesday.

Two-time defending state champions Chamblee Lady Bulldogs are one victory away from reaching the Class 5A state championship for the third consecutive season under Coach Larisa Tulchinsky as they host the Carrollton Lady Trojans at 4:30 pm on Tuesday (April 30) at the Sugar Creek Tennis Center.

Chamblee is 21-1 this season and 68-1 over the past three seasons suffering a loss to Lovett this year breaking a run of 60 consecutive wins. The team has put together another nice run of eight consecutive wins to reach the semifinals again.

A 4-1 win over McIntosh in the quarterfinals propelled the Lady Bulldogs into the match with Carrollton which won 3-1 over South Effingham to advance. The two teams met in the second round a year ago with Chamblee taking a 3-2 victory on their march to a 22-0 record and a second consecutive state title. 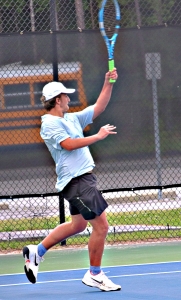 Chamblee’s No. 3 singles player Hap Howell and his Bulldog teammates face off with Buford in the Class 5A semifinals. (Photo by Mark Brock)

Chamblee’s Bulldogs are the state semifinals for the third time, but for the first time since 1999’s run to the state finals where they lost to St. Pius after having won the 1998 Class 2A state title against Westminster.

The Bulldogs (17-5) have won a program tying 17 matches this season pulling even with the 1998 state champion squad which finished 17-0.

A thrilling 3-1 victory over McIntosh last week at Sugar Creek advanced the Bulldogs into the semifinals against Buford, a 3-1 winner over Statesboro. The rematch of a 3-2 loss to Buford in the regular season is set for 4:30 pm and will be played simultaneously with the girls’ match against Carrollton.

Freshman Andrew Pietkiewicz (10-4) won a three-set thriller to clinched the win over McIntosh which had defeated the Bulldogs two consecutive years in the quarterfinals. The Bulldogs No. 1 doubles team of Carter DiFonzo and Bryce Starks (8-1) and No. 2 doubles team of Nevin Aresh and Chase Starks (4-0) also picked up wins against McIntosh. 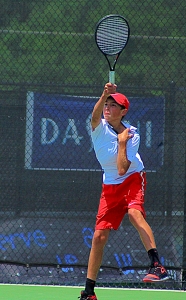 Dunwoody’s No. 3 singles player Quinn Wicklund and the Wildcats face Northview for the third time this season in the Class 6A semifinals. (Photo by Mark Brock)

The Dunwoody Wildcats (12-8) are the third team from DeKalb advancing to the semifinals following a swift 3-0 victory at Lakeside-Evans last Thursday.

Coach Charles Meador’s Wildcats are in the semifinals for the second consecutive season and third in four seasons and take on Region 7-6A foe Northview for the third time this season. Northview won both matches this season 3-2 and 3-1, but the Wildcats won a 3-0 match in the semifinals a year ago to advance to the state finals and a runner-up finish in Class 6A.

Sophomore Quinn Wicklund (15-1) won his No. 3 singles match in a 6-0, 6-0 sweep last week in leading the Wildcats to the win over Lakeside-Evans. Joining Wicklund with victories in the 3-0 sweep were No. 2 singles player Cade Lautenbacher (7-6) and the No. 2 doubles team of Mark Romano and Preston Files.