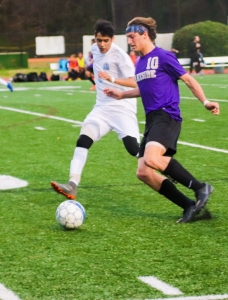 Lakeside’s Maatthew Franklin (10) dribbles past a Meadowcreek defender during the Vikings’ 4-1 Region 7-7A win on Tuesday. (Photo by Mark Brock)

The No. 6 Lakeside Vikings completed a Lakeside sweep of the Meadowcreek Mustangs with a 4-1 win in the boys’ contest at Adams Stadium on Tuesday night.

Lakeside won the girls’ match 10-0 to open the night at Adams as both teams picked up region victories.

Two quick goals in the first 4:08 of the match had the Vikings (8-1-1) up 2-0 before the Mustangs knew what hit them. Jared Spetseris on an assist from Matthew Franklin from across the front of the goal put the Vikings up 1-0.

Just one minute and 44 seconds later Eduardo Guillen snagged a deflection off the Meadowcreek goalie in front of the goal with an assist by Spetseris and put it in to make it 2-0.

The score remained 2-0 until the 5:10 mark of the first half when a deflection by goalie Andrew Seabolt was put in to cut the lead to 2-1 heading into the half.

Eleven and half minutes into the second half Meadowcreek (3-4-1, 0-1) scored what appeared to be the tying goal but the officials called offsides to disallow the score and Lakeside held on to the 2-1 advantage.

The Vikings went back down the field and had a barrage of shots against the Mustangs’ goalie who made three big saves to keep the game at 2-1 as the clock ticked below the 22-minute point in the second half.

About six minutes later Lakeside’s Carter Hunnicutt cleared the ball out of the defensive end with a long kick down the middle of the field. Franklin raced down the field beating two defenders to the ball and put it in the net past the diving goalie to give the Vikings some breathing room up 3-1 with 15:48 to play.

Two minutes later Spetseris put a header into the goal to extend the lead to 4-1.

Seabolt made a diving save with 12:10 to play as a Meadowcreek player got past the defense for point-blank shot the Lakeside goalie knocked away to the left and out of play.

The Vikings managed to keep the ball around midfield and on the other end for most of the rest of the game to seal the win to improve 2-0 in region play. 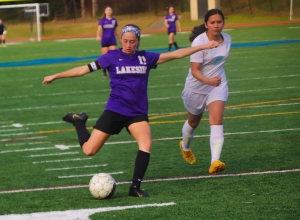 Lakeside’s Olivia Cohen delivers a shot for one of her three goals in the Lady Vikings 10-0 win over Meadowcreek. (Photo by Mark Brock)

(G) Lakeside 10, Meadowcreek 0
Olivia Cohen picked up the hattrick scoring three goals to lead the Lakeside Lady Vikings to a 10-0 win over Meadowcreek in girls’ Region 7-7A action to open the night.

Ella Guzman opened the scoring blasting shot from the left side about 15 yards away into the net for the first of four Lakeside goals in the first 13:25 of the game.

The lead went to 2-0 two minutes late as Kamaria Mustafa put a shot past the diving goalie to up the lead on an assist by Guzman. Cohen would get the first of her three goals at the 30:14 mark of the first half with a penalty kick into the left corner of the net to make it 3-0.

Sophia Maher picked off a deflection by the Meadowcreek goalie just to the left of the goal about five yards out for a score with 26:35 left in the first half to put Lakeside (6-4, 1-1) up 4-0.

It only took Taylor Hunnicutt 41 seconds to score two goals, both on assists from Claudia Vano-Marino and Lena Schaefer, to up the Lady Vikings advantage to 6-0 with 15:48 remaining in the first half.

Cohen connected for her second goal of the game with 12:25 left in the half from about 20 yards out to sent Lakeside into the half up 7-0.

It took less than six minutes of the second half for Lakeside to end the game by the mercy rule with three fast scores coming out of the break.

Abby Hunter and Lena Schaefer scored goals within less than a minute of each other to make it 9-0. Cohen would then score the hattrick as she ended the game with 34:44 left with the 10th goal of the game for Lakeside on an assist from Schaefer.