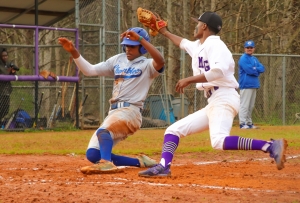 Chamblee’s Travis Hammond (left) slides in safely ahead of a throw to Miller Grove’s Jathan Smith. (Photo by Mark Brock)

Region 5-5A play opened on Monday afternoon as the Chamblee Bulldogs traveled to Miller Grove and came away with a 19-0 victory against the Wolverines.

Starting pitcher Max Stephens was dominate on the mound pitching three perfect innings to start the game as the Bulldogs (7-8, 1-0) built a 7-0 lead.

Stephens accounted for seven of the first nine outs with five coming via strikeout and catching two infield flies. The other two outs came from a flyout to right field and a groundout to second.

Chamblee got on the board in the top of the first as Matthew Welsh doubled to left field to drive in Travis Hammond who led off the game with a walk.

Stephens reached on an error to start the second inning and courtesy runner F. Allers came around to score on a wild pitch to make it 2-0.

Five more runs for the Bulldogs would come in the third inning as Chamblee benefitted from two errors and four walks in the inning. Davis Jenkins, Brandon Lambert and Daniel Sedacca each drove in a run without getting a hit. Chamblee would take a 7-0 lead into the fourth inning after Stephens set down the Wolverines (1-3, 0-1) with three consecutive strikeouts for his third one-two-three inning.

Tony Fenner drove in one of the two runs in the top of the fourth for the Bulldogs as his bases-loaded grounder to third scored Welsh. Allers would score again running for Stephens as he took advantage of a wild pitch to cross the plate as the lead was extended to 9-0.

Jakoby Oliver broke up Stephens’ no-hit bid with a hard-hit single to center to lead off the bottom of the fourth. And Isaiah Palmer doubled to center with two-out as the Wolverines threatened to also breakup the shutout. Stephens fielded a come-backer to the mound and threw to first for the third out to preserve his shutout.

Chamblee closed out the game with a 10-run outburst in the top of the fifth by sending 15 batters to plate. Hammond started the inning with a lead-off double to left to start a string of seven consecutive Bulldogs to reach base. Fenner, John Principe and Leon Schmidt all contributed RBI singles in the inning that included four hit batsmen and three walks.

Stephens gave up a leadoff walk to start the bottom of the fifth, but struck out the next three batters to end the game. He finished the game with nine strikeouts, one walk and two hits allowed in going all five innings to get the win.

Eleven different Bulldogs had at least one RBI in the game with Lambert and Jenkins driving in two apiece. No batter for either team had more than one hit.