Tucker Preparing for No. 1 Tri-Cities in Class 6A Boys’ State Championship 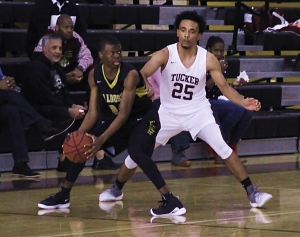 Tucker’s Nick Watson (25) plays some of that tough Tiger defense against Valdosta. Tucker will need to buckle down against Tri-Cities in the Class 6A state title game in Macon at 3:00 pm on Saturday. (Photo by Mark Brock)

It will be a clash of two Top 5 GHSA Class 6A ranked boys’ basketball teams at the Macon Centreplex on Saturday at 3:00 pm as the No. 5 Tucker Tigers face off with the No. 1 Tri-Cities Bulldogs.

The two teams are very different with the Tigers using tough defense and rebounding to advance through the first four rounds with wins over Valdosta (65-49), Evans (65-63, 2 OT), Gainesville (65-58) and Heritage-Conyers (52-46).

Tucker advanced to the state title game with a tough 52-46 over Heritage-Conyers as they held their 17th opponent in 32 games under 50 points. The Tigers average 65.4 points per game offensively with 11 games above the 70-point mark while holding their opponents to an average of 49.7 points per game. 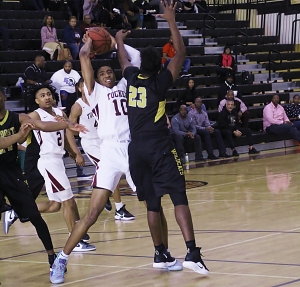 Tucker’s Nate Ogbu (10) grabs a rebound against Valdosta in first round state playoff action. He scored 17 points and grabbed 11 rebounds in the Tigers’ 52-46 win over Heritage in the Class 6A state semifinals. (Photo by Mark Brock)

This 2019 state championship appearance is the seventh overall for Tucker including state titles in 1996 (78-68 over Westover in Class 3A) and 2007 (56-51 over Columbia in Class 4A). Tucker’s last state title appearance was in 2009 when the Tigers dropped a 59-31 decision to Miller Grove which would go on to win seven state titles in eight seasons.

Coach James Hartry (380-175) picked up win number 380 against Heritage and is in his 19th season at the helm of the Tigers. Tucker has a 46-29 record overall in the state playoffs.

See the Class 6A State Finals basketball notes at the link below: