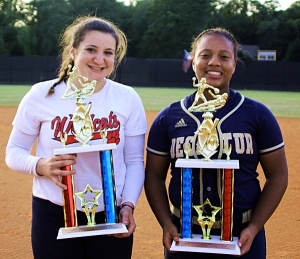 Moss came up just one strikeout short of the All-Star record of 17 set by Imani Gayle of Southwest DeKalb in her 2010 pitching victory. It ties Moss with Southwest DeKalb’s Jada Jefferies who had 16 strikeouts in the inaugural All-Star Softball Classic in 2005.

The Blue All-Stars took the lead in the top of the first inning as Stephenson’s Denaudia Smartt, Dunwoody’s Walker Wicklund and Chamblee’s Rachel Lovejoy had three consecutive hits with one out. Wicklund and Lovejoy picked up the RBI for the 2-0 lead and the Blue never trailed in the game.

Decatur’s Lauren Smith would finish the inning by striking out the side to keep the Blue within striking distance.

A wild pitch in the bottom of the inning allowed Smith to score and pull the Red within 2-1 after one complete.

Moss reached on an error with one out in the second inning as her infield grounder scored Jasmine Walker of Stephenson to make it 3-1. Kamoni Hardaway of Stone Mountain drove in a run on her fly ball to right which was dropped to score Lovejoy and Anna Burke came around to score on the error to make it 5-1 after three complete. 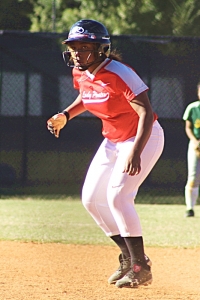 Stone Mountain’s Kamoni Hardaway had an RBI in the Blue’s 10-4 win. (Photo by Mark Brock) 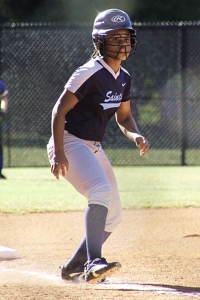 The Red had just one of its 10 batters from the second through fourth innings reach base (error) against Moss who struck out six over that span.

A two-run single by Moss and an infield grounder by Lithonia’s Daven Nesbit pushed three runs across for the Blue in the top of the fifth to extend the lead to 8-1.

Martin Luther King’s Khaiyla Carter stroked a RBI single to right in the bottom of the fifth to score Decatur’s Haley Russell who doubled ahead of Carter. Moss worked out trouble with a pair of strikeouts in the inning.

A pair of errors and stolen base allowed Lovejoy to make it around the bases in the sixth without the aid of hit to make it 9-2.

Decatur’s Sydney Pettus hit a rope into right-center field for a triple to score Miller Grove’s Arieyana Zachery in the bottom of the sixth. Pettus then scored on a wild pitch to make it a 9-4 game.

Southwest DeKalb’s Ajah Gaston reached on an error in the seventh and then scored on an error for the final run of the game to make it 10-4. 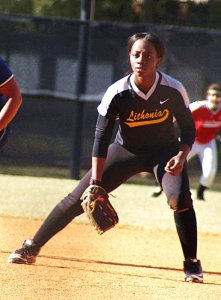 Lithonia’s N’Layia Perkins ready at first base. Perkins made some nice stretches to complete outs for the Blue defense. (Photo by Mark Brock)

Moss allowed just three base runners over the final three innings while striking out four to wrap up the win.

Most Valuable Player awards went to Moss (16 strikeouts, 2 walks, 3 RBI) for the Blue and Decatur’s Smith (3-5 at the plate, 8 strikeouts, no walks on the mound) for the Red.

The Red/Blue series started in 2013 after eight seasons of a North/South (4-4) matchup with the Blue’s win cutting to 4-2 in favor of the Red which had won the last two matchups.