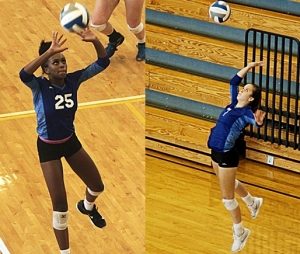 Juniors Jade Watson (25) and Becca Evans (7) were named to the GACA Junior Volleyball All-Star game this week as they lead the Lady Bulldogs against the No. 1 McIntosh Lady Chiefs on Saturday at 11:00 am. (Photos by Mark Brock)

A 41st win on the season did not come easy as the No. 2 ranked Chamblee Lady Bulldogs pulled out a nail-biting 3-0 Class 5A Sweet 16 playoff match over the Decatur Lady Bulldogs at Chamblee on Tuesday night.

The third and final game went an extra three points before Chamblee closed out an exciting 28-26 clincher to advance to the Elite 8 for the third consecutive season.

Chamblee’s 41 wins (41-6) on the season is the second most in program history behind the 2005 squad led by Brooke Kline that went 56-8 on the way to the Final Four.

Chamblee which has been ranked No. 2 most of the season opened the year with 21 straight wins before dropping a tough match to Etowah on September 8.