Defending DCSD Junior Varsity Cross Country County champions Lakeside (girls) and Dunwoody (boys) repeated in two of the closer races over the past 14 seasons at the Druid Hills Middle School course on Monday.

Eighth grader Haley Davis took the girls’ individual title by running the 17th fastest girls’ time (14:17.00) in records dating back to 2005 to out-pace the rest of the pack by 51.60 seconds for Lakeside. Her time was also the fasted JV time at Druid Hills this fall.

Davis led a group of six Lakeside Lady Vikings to finish in the Top 10 on the way to a 22-40 win over Dunwoody.

Dunwoody freshman Lucy Neumann (15:08.60) was the girls’ runner-up and the only runner not from Lakeside in the first five runners to cross the line. 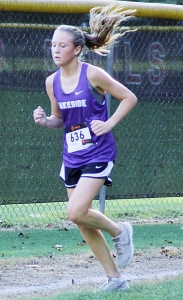 Lakeside’s Haley Davis was the girls’ gold medalist in the 2018 JV Championships. (Photo by Mark Brock)

Clarkston freshman Colete Milak (15:46.90) finished seventh overall to lead the Lady Angoras to their first team finish in the past 14 seasons as they took third with 92 points.

Lakeside’s second consecutive title was the program’s sixth overall. Dunwoody leads the girls’ with eight titles since 2005. It was Dunwoody’s fifth runner-up finish. 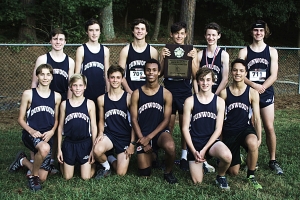 Freshman Ethan Archibald of Dunwoody ran a time of 12:09.70 to take the gold in the boys’ race in leading four Wildcats into the Top 10. 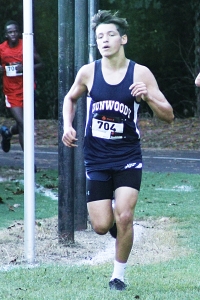 See complete results at the link below:

See JV cross country history since 2005 at link below: