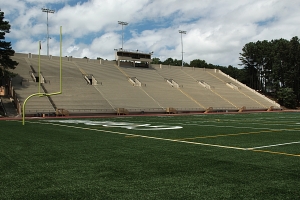 Buck Godfrey Stadium hosting the big Region 4 clash between Chapel Hill and Cedar Grove on Saturday, Oct. 13 at 10:00 am.

Pressure cooker wins last Saturday by Chapel Hill and Cedar Grove sets up a big game with playoff implications in Week 8 as they face off in the final regular season game for both teams.

Trailing by two scores the Panthers found a way to win as Tenieyus Hudson got a key fumble recovery that allowed the Panthers to knot the game at 22-22 with time winding down.

The Panthers rolled the dice with an onside kick following the tying score and Omarion Watson recovered for Chapel Hill to set up the game-winning drive. Chapel Hill left just seconds on the clock as the winning score put the Panthers up 28-22.

Bethune had built its lead behind Isaiah Logan’s touchdown passes to Armond Davis (60 yards) and Bernard Mack (50 yards) and a 75-yard kickoff return by Davis.

Chapel Hill got three rushing touchdowns and a two-point conversion from quarterback Sabian Campbell who also connected with Ethan Patterson on a pair of key passes for first downs to keep drives alive. The offensive line provided big holes for their backs as Elon Patterson rushed for over 100 yards and touchdown and Billy Johnson had several key runs for first downs to compile over 70 yards rushing in the game.

Joe Foots had two quarterback sacks and a big safety in the first quarter to lead the Panthers’ defense. Tierion Webb contributed a sack and several other big stops along with his defensive line teammates to slow down the Bethune offense.

The Lions’ defense got four tackles, a forced fumble and a fumble recovery by Bernard Mack and four tackles from Jaiden Figaro. Sam English contributed an interception.

Naeshawn Parsons returned a punt 50 yards for a touchdown in the second quarter and struck for a 20-yard touchdown run in the third quarter.

The game winner was a Jamar Graham touchdown pass to Alvin Williams as the pair connected for the nine-yard scoring play.

McNair, which saw its hopes for a berth in the Trail to the Title playoffs for the first time since 2010, got a pair of touchdown runs from Royce Tolbert to keep pace with Cedar Grove.

Tolbert added an interception and Markel Banks had three tackles for a loss for the Mustangs.

The Bulldogs got a pair of touchdown runs from Jacoi McClary and another by Octavion Tennell for the win. Lithonia can clinch the Region 3 title with a win over the Miller Grove Wolverines (2-3, 2-1) in the final week of play.

The Wolverines, who defeated Salem 12-0, could play their way into the playoffs with a victory combined with a loss by Redan (3-2, 2-1). Redan is playing Freedom (2-3, 1-2) in an effort to clinch a playoff berth that final weekend.

Two of the touchdowns came via the pass as Arrington Watkins and Kendrick Lackey hooked up for a pair of touchdowns. Ameir Dailey, Jackson Washington, Channing Henderson and Christian Williams all ran for a touchdown in the game.

The defense picked up the shutout while Cameron Ferguson and Kyle Mosley each had tackles for a safety in the game.

Antretz McDowell had seven tackles for the Druid Hills’ defense.