Running Down Your Dreams and Making Them Coming True 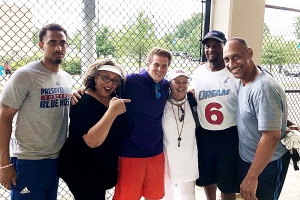 Charlie “Rocket” Jabaley (orange shorts) returned home to Chamblee to touch some lives because of those who did so for him at Chamblee High. Pictured with Charlie (l-r) Ryan Burgess, Brenda Burgess, Charley, his mother Naomi Jabaley, Coach Bob Eskew and Coach Caesar Burgess.

Charlie Jabaley dreamed of becoming an athlete growing up in Chamblee and now at the age of 30 he’s a Nike sponsored athlete on a mission.

His mission is to touch the lives of one million people in a positive way giving and sharing with them to see their way through problems as he did to turn his life around from being a stressed out, overweight millionaire in the music industry dealing with many health issues.

“Charlie is so fortunate to have found his purpose in life at such a young age,” said his mother, Naomi Jabaley. “I never had goals like Charlie has throughout his life in business ventures or giving back to people, but I can be his biggest cheerleader.”

Growing up across the street from Chamblee Charter High School his love of sports, especially basketball, was a big part of his life and circle of friends. However, his weight problems limited his ability to participate at a high level.

His basketball three-point shooting prowess (a former Oglethorpe Basketball Camp record holder) drew the attention of a person he credits lifting him up at one of the lowest points in his life in Chamblee boys’ basketball coach Caesar Burgess.

“Some of the other coaches and P.E. teachers came to me one day early in the school year and said I needed to see this freshman shoot the basketball,” Burgess said. “I saw this kind of short, overweight kid shooting the lights out. His personality drew me to him quickly as it seemed to do with everyone at school.”

CEO Charlie as he became to be known with his suits and suitcase at school served as the team manager which Burgess termed more of a player personnel guy.

“He was such a great bridge between the players and coaches,” Burgess continued. “He had a great eye for talent and he knew when we needed to take it easy on a player due to a bad day or other problems. That kind of ability with people is what drew so many to him and for them to see him as more than the overweight kid who could shoot a basketball.”

One Great Gesture
Charlie and his mother both credit Burgess for being there for him at one of the most pivotal times of his life.

After two years of severe migraine headaches, Charlie was sitting on the bench at a Chamblee basketball game watching the Bulldogs play when a headache got so severe he could not even watch the game.

“I stayed home the next day and I got this crazy pain in my left eye and I knew somehow the doctor had missed something,” Charlie recalled. “My grandfather took me to Piedmont Hospital where a doctor checked my eye and realized I had a brain tumor.”

The tumor was inoperable and a course of medications was recommended. The diagnosis was a big setback for the high school student. The tumor would be with him for life.

“I was at home, depressed and not sure what was to come for me,” said Charlie. “Then there was a knock on the door and Coach Burgess and the team were there to see me. That gesture by Coach and the team really brought me back and showed that people cared for me.”

Burgess and his team had found out about his tumor and knew things were serious for Charlie. He gathered his team up and walked down the street to the Jabaley’s home.

“It was just like a family get together for all of us,” said Burgess. “Working in education there are so many opportunities out there every day to help someone and you just have to put your own problems aside. I was just trying to help a student. I really had no idea it would turn out to mean so much to Charlie and his family.”

Naomi Jabaley said it always brings tears to her eyes when she thinks of Coach Burgess and the way he played such a role at this pivotal time for her son.

“Charlie had really shut down at that point,” said Naomi. “Coach Burgess brought his team down the street and asked Charlie to come outside where the entire team just prayed with and for him. It was the power of prayer and is probably why he is still with us.”

The medication prescribed began to shrink the tumor and Charlie was able to continue his business ventures and working with the basketball team until he graduated in 2006.

Atlanta Hip-Hip Mogul
A stint in college followed and then short-lived jobs in the music industry before he and friends started the music company Street Execs which grew into a multi-million dollar business with such hip-hop clients as 2Chainz, Young Dolph, the late Bankroll Fresh, Skooly and Travis Porter.

“I had no idea Charlie had become such a foundation for hip-hop in Atlanta,” said Burgess. “He is such a remarkable kid and always has been.”

As the business grew so did the stress that took a toll on Charlie as his weight ballooned to 305 pounds and his tumor reemerging to cause problems he realized he needed to make big changes in his life. He stepped away from a million-dollar business to get things right with himself.

“We built a great business and were making millions of dollars, but it was causing me a lot of health problems,” Charlie said. “I knew I had to change my life and that the money meant much less than a healthy, meaningful life. I wanted to inspire others and make a difference in the world.”

Life Changes
Charlie uprooted his life and moved to California where he changed his diet to being a vegan and began to run. He started to lose weight and the tumor became less of a problem again.

“My goal became to train and participate in an Iron Man Triathlon,” said Charlie. “My best friend and training partner, Scott Cameron, worked out together and I began to lose weight in preparation for the Iron Man.”

His weight dropped from 305 to 175 (130 pounds) as he went and finished the Iron Man in New Zealand and since has gone on to run four marathons in Santa Rosa, CA, Atlanta and Los Angeles (2).

This hard work and his own fan made Nike commercial got his foot in the door with the shoe company and got him a cover shot for Runner’s World Magazine. His dream of being a Nike athlete had come true, but he was and is far from done giving back.

Charlie and Scott rode bicycles as part of their training and while journaling Charlie came up with the idea to bike across the country, help some people along the way and inspire others to do so as well.

“Scott came up with the name Dream Machine for our RV that would escort us and be our resting place along the way,” Charlie said. “We got it fixed up where people could come up and write their dreams on it. 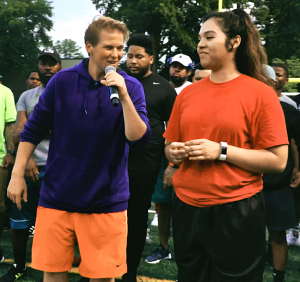 Touching Lives, Making a Difference
The 92-day trek for the Vero Dream Machine Tour from Santa Monica, CA to New York City involved stops in San Diego (CA), Phoenix (AZ), Houston (TX) and his home in Chamblee outside Atlanta surprising people by fulfilling some of their dreams and giving away running shoes.

“I wanted to inspire people get out and run. Make it cool again,” said Charlie. “Running saved my life.”

One hundred and fifty people joined Charlie and Scott at North DeKalb Stadium next door to his old high school and neighborhood for a special event on their bike trip across the country.

A special guest was invited not knowing she would be the focus of the event. Amira Valeriano-Campos. She had lost her lower left leg in a car accident about two years prior and her dream was to run again.

Charlie brought her up in front of the crowd to tell her story and then presented her with a prosthetic running blade Vero Social Media and he made possible that would help her dream come true.

Doctors were on hand to help her with putting the prosthetic on and about 20 minutes later Charlie, Scott and the 150 others gathered on the field to join Amira as she ran for the first time in almost two years.

“She had no idea what was coming,” said Charlie. “She is an amazing woman and now she is living her dream.” 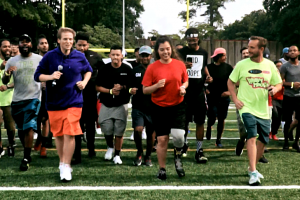 The 150 attendees along with Amira received Nike running shoes as part of the 305 Charlie gave away in the Atlanta area that weekend symbolizing his heaviest weight.

The return home was an exciting one for Charlie as he got to see so many of the people who had believed in him over the years. People such as Coach Caesar Burgess, his mom, Naomi, and dad, David, believing and supporting his dreams were what made his homecoming so amazing.

“Seeing Coach Burgess again was such a great experience,” said Charlie. “He always believed in me and saw my potential.”

It is far from over for Charlie heading into this next year as he is currently part of the Nike ad campaign with Colin Kaepernick where it says, “Don’t’ ask if your dreams are crazy. Ask if they are crazy enough.”

“I’m one of those crazy dreamers,” said Charlie in an interview with TMZ Sports. “I quit my job, lost 130 pounds, beat a brain tumor and became an Iron Man.”

Another Iron Man is in the future for “Charlie Rocket” as well as working on a project with the NBA, more traveling around the country and the world to inspire and touch people’s lives, more collaborations with Nike and even a book about his journey.

Run down your dreams and make them come true.