Junior Thaddee Barge captured his second individual title of the season to lead the Clarkston Angoras to a 24-55 win over the Tucker Tigers in the boys’ second race at the Arabia Mountain High School cross country course on Tuesday.

Barge clocked a time of 19 minutes even while three teammates followed him across the line in the Top 5. Senior Rukundo Uwimana was second (19:12.70) followed by Piyo Micheale (19:15.10) in third and coming in fourth was sophomore Firomsa Ibrahim (19:24.50).

Martin Luther King’s Demetrius Carson who has three wins under his belt this season was fifth in 19:35.30. Tucker senior Ian Nuhfer started the second wave of the Top 10 in sixth (20:19.20) followed by teammates freshman Abedelemeji Kerebo (20:38.20) in seventh and junior Yesahk Ergano (20:43.40) coming in eighth.

Tucker was the only girls’ team in the second race to field a full team finishing with 15 points to win the team race.

Clarkston sophomore Griselda Gonzalez (29:36.60) was fourth and Martin Luther King Jr. freshman Demetria Lind (29:42.00) was fifth to make it an all underclassman Top 5. 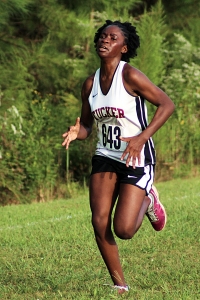 Tucker’s Benitta Kawata was the first girl to cross the line in the second varsity race at Arabia Mountain. (Photo by Mark Brock)

Towers and Arabia Mountain tied for first in the boys’ first race of the day with 62 points each while Cedar Grove was third with 67, Southwest DeKalb was in fourth with 68 and Stephenson was in fifth with 76. 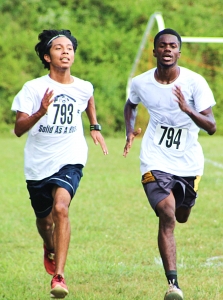 Three seniors and a junior from Southwest DeKalb grabbed Top 10 finishes in the girls’ first race of the day as no team had enough runners to qualify for a team score. 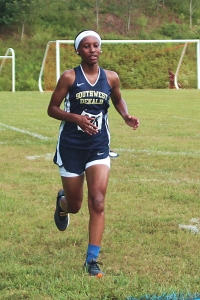 Cedar Grove and Arabia Mountain also put a pair of runners in the Top 10.

The next DeKalb County meet is scheduled for Tuesday, September 18 at Druid Hills Middle School course. The first varsity race is set for 5:15 followed in order by the junior varsity and second varsity races.

SEE LINK BELOW FOR FULL RESULTS: