Arabia Mountain Pulls Away from Stephenson for 13-3 Softball Win 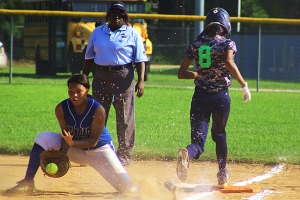 A four-run third inning aided by five errors helped the Arabia Mountain Lady Rams pull away from a 2-2 tie on the way to a 13-3 victory over the Stephenson Lady Jaguars at Stephenson on Wednesday.

With the game knotted at 2-2 after two innings of play, Arabia Mountain had the first three batters of the third inning reach via error in Michaela Evans, Aubri Gray and Myiah Lewis. Two errors later the score had jumped to 6-2 as the first three to reach all scored along with Colby Richardson.

Brianna Smith hit her second RBI single of the game in the bottom of the third as the Lady Jaguars tried to rally. Evans, the Arabia Mountain pitcher, was facing a runners at first and third situation with one out. She responded by striking out the next two batters to end the inning with her team still holding a 6-3 lead.

Aleaya Thornton reached on a bunt single to start the top of the fourth inning, but Smith answered with a strikeout and a ground out to get within one of out of not allowing a run in the inning.

Evans set the Jaguars down 1-2-3 in the bottom of the seventh, including her fifth and sixth strikeout of the game.

Thornton reached on a bunt single for the second time to start the fifth, stole second and scored on an error to make it 10-3.

Stephenson had runner reach base in the bottom of the fifth, but a pop up on the infield ended any threat.

An RBI single by Raven McGhee and a two-run single by Thornton made it 13-3 heading to the bottom of the sixth with Stephenson needing at least one run to keep the game going.

Olivia Townsend reached on an error with one out in the bottom of the seventh as Stephenson threatened with two on and two out in the inning. Evans enticed a pop up on the infield for the third out to end the game.

Evans finished her time on the mound with seven strikeouts and allowing two walks, five hits and three runs as Arabia Mountain improved to 2-3 on the season.

Brianna Smith was 2-3 with two RBI, but suffered the pitching loss as 6 of the runs she gave up were unearned. Dejah Williams was 2-3 with a run scored. Stephenson falls to 0-2 on the season.