Dunwoody Shuts Out Lakeside 9-0 on the Road 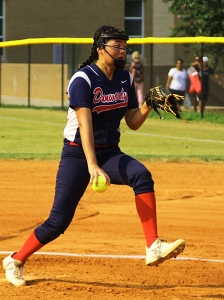 Dunwoody’s Kayla Chiang pitched a three-hit shutout in the Lady Wildcats’ 9-0 win on Monday at Lakeside. (Photo by Mark Brock)

Chiang got the nod on the mound in the non-region contest and went 2 2/3 innings before giving up a hit to Lakeside’s Brady Miccichi with two out in the bottom of the third inning.

While Chiang was keeping the Lady Vikings (1-3) in check, her teammates were giving her the lead. The Lady Wildcats (3-0) struck for a pair of runs in the first inning as Molly Kotzin’s coming backer to mound scored Gracie Puckett from third and Sara Goodleman’s RBI double to center pushed Walker Wicklund across the plate.

Chiang made it 3-0 in the second inning as she walked and scored on Taylor Pierce’s grounder back to Lakeside pitcher Brooke Bergstrom.

In the top of fourth inning, Samantha Moss led off with a triple by hustling to third with a head first slide to beat the throw. Chiang aided her own cause again as her grounder to shortstop plated Moss to make it 4-0.

Miccichi’s single to break up the no-hit bid in the third inning would be as close as the Lady Vikings would come to score. Mack Blair followed with a double, but Miccichi was tagged out on a bang-bang plate at home for the third out.

The Wildcats closed out the game by exploding for five runs in the top of the six spurred by Moss’ second triple leadoff triple of the game. She scored on a ground out to make it 5-0.

Zuri Watts reached on an error with one out in the inning and scored on Mulford’s RBI single to make it 6-0. Wicklund knocked in a p air of runs with a double down the left field line to push the lead to 8-0. 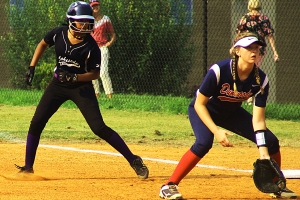 Kotzin made the final of 9-0 with an RBI single to left to plate Wicklund.

Mack Blair was 2-3 including a double to lead Lakeside’s offense in the game.