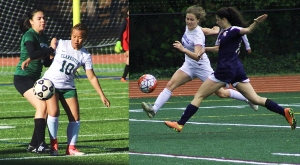 Scarlet Red has several of the top scorers in the county this season led by Southwest DeKalb senior Georgia Anna Sinclair and her county leading 41 goals. She is also tied for second in DeKalb with 11 assists on the season.

Lakeside senior goalie Julia Moreman (7-3-2) is set to play in goal for the Scarlet Red team. Moreman leads the county with a 0.52 goals allowed average in 612 minutes defending the goal.

Turquoise Blue has the county’s second leading scorer in Redan sophomore Amadia Veasley who had 34 goals and is tied for second with 11 assists.

Towers junior Shaheedah Watkins has played 888 minutes in goal this season with a 5.23 goals allowed average and is 8-6-0 in goal on the season. 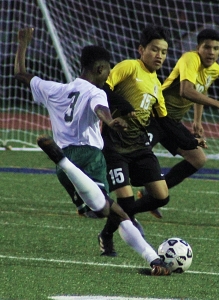 Clarkston’s Tuyisenge Israel (3) and Cross Keys’ Miguel Hernandez (15) face off one last time in 2018 on opposite sides of the 2018 DCSD Boys’ All-Star Soccer game. (Photo by Mark Brock)

Team White has five of DeKalb’s scorers with 10 or more goals led by Stone Mountain’s Alex Kalombe who is seventh with 15 goals on the season. Clarkston’s Gezai Eta and Druid Hills junior Nate Jackson are right behind Kalombe with 14 goals each and Southwest DeKalb senior Marquel Crowder with 13. Arabia Mountain sophomore Ahdjogo Mahnassi finished with 10 goals on the season.

The goal should be in good hands with Stone Mountain senior Arley Marrowquin (6-4-2, 1.35 goals allowed, 886 minutes).

See full rosters at the link below: