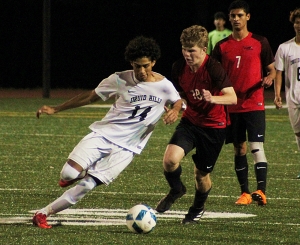 Druid Hills freshman goalie Ruben Angeles made three clutch saves in the penalty kicks session to help propel Druid Hills to the 5-4 penalty kick victory over Woodward Academy and the Region 4-4A boys’ soccer title on Friday the 13th at Adams Stadium.

The No. 9 ranked Red Devils and the No. 5 ranked War Eagles had played 65 minutes and 19 seconds of scoreless soccer, including the two five-minute overtime periods, after two quick goals to make it a 1-1 game with 15:19 left in the first half.

Woodward hit its first four penalty kicks and Druid Hills missed one and was one miss by Druid Hills away from a win. Sophomore Alan Alvarado came through for the Red Devils to tie the session at 4-4.

Marshall Golick was not to be out done as he snared Joan Rendon’s shot to keep the game at 4-4 and Angeles was back in net with the game on the line for the second consecutive time.

He answered the bell again with another deflection wide of the goal to keep the game tied at 4-4 in penalty kicks.

Defenseman Aung Lay was up next for the Red Devils and beat Golick to give the Red Devils a 5-4 advantage and putting Angeles back in goal needing a save or miss by Woodward to get the victory.

Golick moved out from behind the goal to take the attempt for the War Eagles. He kicked to Angeles’ right towards the corner only to have the Druid Hills goalie make his third consecutive penalty kick save to preserve Druid Hills’ win.

The Red Devils mobbed Angeles in the goal as the team celebrated their second consecutive Region 4-4A title and a No. 1 seed in the Class 4A state playoffs that begin on April 27th.

Jeremy Lloyd, Nate Jackson, and Izack Clark all converted their penalty kicks for the Red Devils.

The game was a defensive battle throughout and Druid Hills broke through first as Rendon’s deflection of a pass from Jackson found the goal with 15:54 left in the first half for a 1-0 lead. 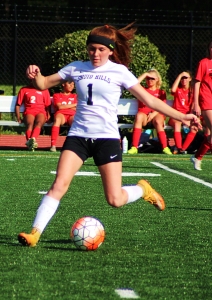 The lead only lasted 39 seconds as Woodward (13-2-1, 3-2) raced up field and Ben Wombaugh guided a teammate’s pass into the goal in almost an instant replay of Druid Hills’ score.

A late shot as the half ended found the goal for Woodward but was after the horn sounded and the two teams went to the half knotted at 1-1.

(G) Woodward 6, Druid Hills 0
Woodward clinched the girls’ Region 4-4A title with a 6-0 shutout of the Druid Hills Lady Red Devils in the opening game at Adams Stadium.

AC Farley would score the first and only goal the War Eagles (6-9-0, 5-0) would need with 26:35 left in the first half to make it 1-0. Molly Ross and Brooke Sard also scored in the first half as Woodward took a 3-0 lead into the half.

Three more goals in the second half closed out the 6-0 win by the visitors from College Park. Druid Hills fell to 8-6-0 overall and 3-2 in the region and will finish third and go on the road in the state playoffs.