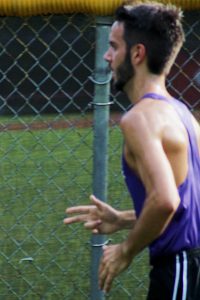 The fifth week of the 2017 DCSD cross country season featured sweeps in the two varsity races of the day at the Druid Hills Middle School course on Tuesday.

Lakeside took the team titles in the opening races of the day as the Vikings won 26-38 over Clarkston in boys’ action and the Lady Vikings picked up a 21-56 win over Dunwoody in the girls’ race.

Jake Tubesing ran the fastest time in DeKalb County competition as he clocked a 17:29.00 to pace three Vikings in the top four finishers.

Mikias Mekonen followed just five seconds behind in 17:34.00 to finish second with Miles Boyd in fourth with an 18:01.00. William Nelson was the fourth Viking to cross the tape taking eighth in 18:13.40. Daniel Martinez clinched the win over Clarkston finishing 11th in 18:40.20. 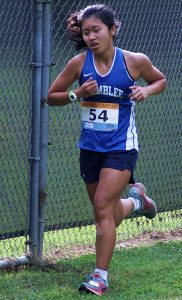 Chamblee senior Beining Xiao clocked the fastest girls’ time in DeKalb this season at 20:55.30 to take top honors in the girls race at Druid Hills Middle. (Photo by Mark Brock)

The Lady Vikings put six across the finish line in the first 10 to clinch the girls’ race while Dunwoody (56) and Chamblee (59) each had two runners in the top 10.

Stephenson was fourth with 135 followed by Clarkston with 138 and Tucker with 170.

Chamblee’s Beining Xiao ran the fastest girls’ time in DeKalb this season with a 20:55.30 to outrun the pack by 48.40 seconds to claim the girls’ individual title. 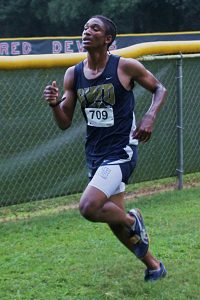 Second Varsity Competition
Despite a one-two finish by Southwest DeKalb’s Anthony Parker (19:30.30) and Nakai Jack (19:53.10), the Lions of Martin Luther King Jr. claimed a 40-71 win over Arabia Mountain to capture the boys’ team title in the second race of the day at Druid Hills Middle. 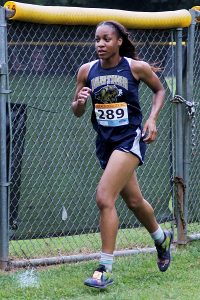 Southwest DeKalb picked up a sweep of the individual title as Raven Thurman captured first with a time of 27:39.90, but the Lady Lions won the team title with 15 points as the only full team in the race. 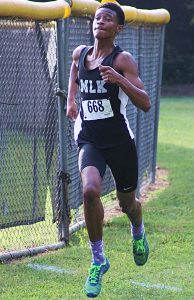 Junior Varsity
Chamblee put together the third sweep of the day at Druid Hills taking the boys’ and girls’ titles in the junior varsity race. 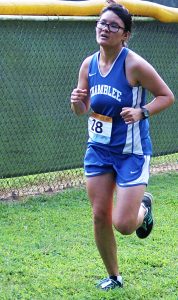 Four Lady Bulldogs were in the first 10 to cross the finish line, including four in the top 5, to outrun Southwest DeKalb 20-41 while Cross Keys was third with 73.

See links below for complete results from Druid Hills this past Tuesday.