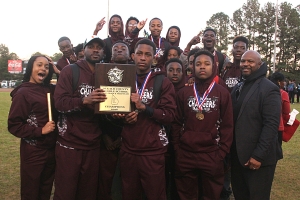 A point total of 99.5 for Champion surpassed runner-up Stephenson’s 92 for the title with Chamblee in third with 68.5 points.

Champion’s 99.5 points was the highest total in the nine years of the presenting of the middle school award. Stephenson held the previous high total of 94.5 set back in 2010.

Champion’s previous best finish in the All-Sports standings was second in 2011 and 2015. The Crusaders came up just five points shy of 2015 champion Cedar Grove.

This win breaks a trend of having just four teams win the award over the previous eight seasons.  Stephenson, Cedar Grove, Chapel Hill and Miller Grove are all two-time award winners with Chapel Hill winning the inaugural award in 2008. 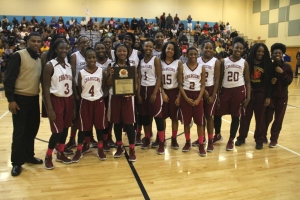 Two-time winner Stephenson had a solid season with its 92 point total which would have won 6 times in the previous years. The Jaguars boys’ basketball team completed a repeat championship with a 17-0 undefeated season in 2016.

Chamblee made its first Top 3 finish since 2010 (2nd) and in the Top 5 since a fourth in 2011 with its 68.5 points. The girls’ track team was tied for the runner-up slot with Champion in the country track meet while boys’ basketball was a region champion and girls’ basketball a region runner-up.

Cedar Grove, the 2015 award winner, finished in a tie for fourth with Salem as both programs picked up 68 points. Cedar Grove won the football title for the second consecutive season and Salem won the girls’ track title.