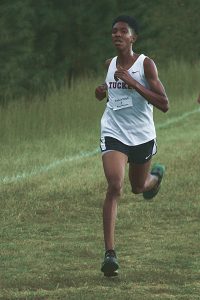 Tucker senior Ryan Wurapa finished up the regular season with an individual title at Arabia Mountain on Tuesday to lead the Tigers to the team win. (Photo by Mark Brock)

The Tigers placed six runners in the Top 10 to run away with the boys’ race at the Arabia Mountain High School course on Tuesday by a score of 21-94 over Arabia Mountain.

Tucker claimed the top three places in the race led by individual champ senior Ryan Wurapa in 19:11.43. Sophomore Miles Smith was second in 19:14.66 and sophomore Abdilnur Tiroro was third in 19:17.30.

Second place Arabia Mountain was led by sophomore Ridge Turner in 10th place with a time of 21:49.19.

The Lady Rams of Arabia Mountain placed only one runner in the Top 10, but four in the 11-15 spots to edge Stephenson 57-61 in the girls’ race.

Tucker was third with 91 and Miller Grove fourth with 108. 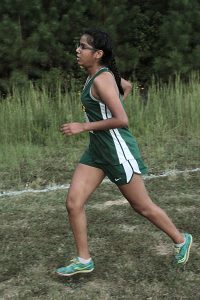 Second place Stephenson put three runners in the Top 10 led by sophomore Diamond Tillman (29:19.38) in sixth, but could not get enough runners across the line before Arabia Mountain.

The DCSD County Junior Varsity Championships are set for Thursday, Sept. 29 at Druid Hills Middle School. The girls run at 5:15 with the boys following at 5:45.

Dunwoody swept the boys’ and girls’ titles in 2015 over Lakeside. The Dunwoody girls’ are riding a five-year streak with the JV Championship trophy.

The Wildcats knocked off the Vikings in 2015 breaking a five-year run by Lakeside in the JV County Championships.