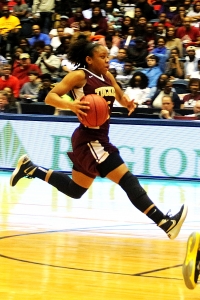 Tucker’s Morgan Collins drives during second half action of the Class 6A girls’ state championship against McEachern. (Photo by Mark Brock)

Two-time defending champion McEachern took advantage of 29 second half trips to the free-throw line to pull away from the Tucker Lady Tigers for a 71-51 win in the Class 6A girls’ state championship game at Macon on Saturday night.

McEachern held a 29-24 lead at the half and opened the third period with a 7-0 run to put some distance between the two teams.

Tucker tried to answer on a three-pointer by Najla Shamsid-Deen and drive by Jayla Morrow to cut the lead to 38-29.

McEachern put together another 7-0 run to push the advantage back out to 45-31 on a Tierra Lindsey basket with 2:51 left in the quarter.

Bria Bass had a three-point play to trim it back to 11 (47-36) with 1:34 remaining in the quarter, but consecutive baskets by Lindsey and Chanel Wilson sent the Lady Indians into the fourth quarter with a 51-37 lead. 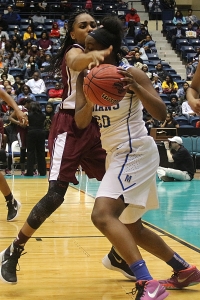 McEachern would hit 13 of 21 free throws in the fourth quarter to continue to pull away to secure its third consecutive state title.

Shamsid-Deen helped the Tucker Lady Tigers calm down late in the first half with McEachern leading 27-17 with 2:02 left in the half as 12 Tucker turnovers contributed to the 10-point deficit.

McEachern then went into a stall game and with eight seconds left Kierra Johnson-Graham made a steal and a long three rimmed out at the buzzer.

Shamsid-Deen finished with a double-double of 15 points and 10 rebounds while Morrow was tied with the team-high 15 points and Kierra Johnson-Graham pulled down 12 rebounds.

Jasmine Clements had a game-high 17 points to lead McEachern while Que Morrison added 14 points and 11 rebounds and Jada Lewis finished with 12.