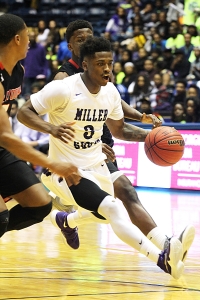 Senior Colin Young made the plays Miller Grove needed in the final 1:44 of the game to propel the Miller Grove Wolverines to a 50-48 victory over previously undefeated Allatoona in the Class 5A boys’ state championship in Macon on Friday night.

Young who had sat most of the fourth quarter with foul trouble got open about 10 feet along the left baseline and Aaron Augustin who was pushing the ball up the court hit him with a pass. Young took one dribble and lofted a jumper with 1:27 remaining to give the Wolverines a four-point cushion at 49-45.

The Buccaneers got up the floor looking for a three-pointer to close the gap and Kevin Perry got off a shot which missed but a foul was called on the Wolverines sending him to the line for three free throws. Perry calmly sank all three to close the gap to 49-48 with 1:07 to play.

A miss on a one-and-one free throw by the Wolverines was rebounded by Perry and the Buccaneers moved the ball up the court and called timeout.

Out of the time out the Wolverines pressured Allatoona and a drive at the free throw lane was cut off and Young came up big again with a steal and passed the ball up the court. As Miller Grove passed the ball to run out the clock Young took a pass and was immediately fouled by Allatoona with five seconds to play.

Young hit one of the two free throws for the 50-48 advantage and Allatoona again called time to set up a play.

Miller Grove forced the Buccaneers to pass the ball into the back court and dribble up court. The Wolverine defense led by Raylon Richardson knocked the ball lose in the front court and in the scramble the clock ran out sending the Wolverines and their fans into a loud celebration. 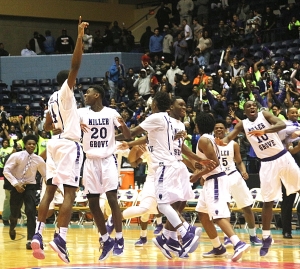 Miller Grove’s Raylon Richardson holds a No. 1 in the air as he and his Wolverine teammates celebrate the Class 5A boys’ state championship victory over Allatoona. (Photo by Mark Brock)

The Wolverines had trailed by as much as five in the third quarter and Aaron Augustin who scored a team-high 16 points scored seven in the final 1:36 of the period to send the Wolverines into the fourth quarter down 40-37.

Richardson found himself all alone at the top of the key with 5:01 left in the game and drained a three-pointer to pull Miller Grove into a tie at 44-44.

Neither team would score in the next two minutes before Naquante Hardy cut to the basket and took an Augustin pass for a layup to give the Wolverines the lead for good at 46-44 with 2:35 remaining.

Miller Grove and Allatoona played an ugly first half with 23 turnovers between the two teams as Allatoona kept Miller Grove held in check leading 12-9 at the end of the first quarter.

The Wolverines led by four quick points from Alterique Gilbert took a 13-12 and the two teams traded leads until Colin Young drove the basket for a layup and was fouled. Young made the basket and the free throw to put Miller Grove up 20-17 with 3:01 to play in the first half.

Three free throws by Allatoona’s Dylon Ramsey tied the game at 20-20 with 1:50 remaining.

Naquante Hardy gave Miller Grove the lead with a short one-hander and Gilbert added a pair of free throws to send the Wolverines into the half up 24-20. 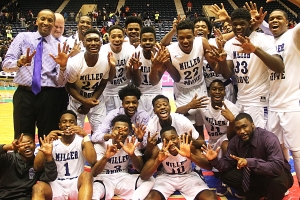 Joining Augustin in double figures for Miller Grove was Alterique Gilbert with 15 points. The Wolverines (30-2) offset a poor rebounding night having just 17 (including just 1 in the third quarter) by forced the Buccaneers (31-1) into 23 on the night including the two big ones in the final 30 seconds of the game.

Ephraim Tshimanga tied Augustin for the game-high with 16 points to lead Allatoona and Perry finished with 13.

DeKalb County has now won two or more state titles in seven of the past nine seasons with 2011 and 2015 being the exceptions.