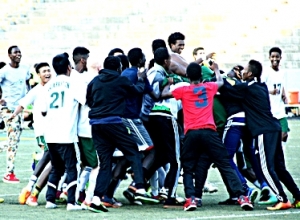 The No. 10 ranked Clarkston Angoras needed 7 penalty kicks following overtime to knock off No. 6 Starr’s Mill in the second round of the Class 5A Boys’ State Soccer Playoffs on Tuesday night at Hallford Stadium.

The two teams went into the penalty kick tiebreaker knotted at 0-0 after regulation and 10 minutes of overtime play. Both squads sent six players to the line to kick penalty kicks and were still tied at 6-6.

Clarkston goalkeeper Cubaka Hubert, who had played all of regulation and the overtime in goal, had set out the first four penalty kicks in favor of the quicker Anthony Konah returned and just missed stopping two kicks by Starr’s Mill as the teams went to the seventh round all tied at 6 apiece.

Hubert was ready as Starr’s Mills Jackson Mattox zeroed in on the ball and dove to his right to knock the attempt away giving the Angoras the game winning opportunity. 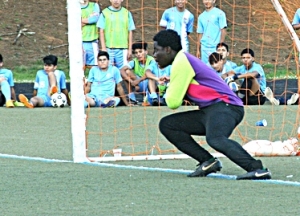 Clarkston’s Paul Nikobiri was next up and calmly set up for his attempt. Nikobiri ran at the ball and blew the ball into the upper right corner for the winning point (7-6). Nikobiri turned and ran to greet teammates who lifted him up as they celebrated the victory. The group then turned and gave Hubert a ride above their heads as well.

Clarkston (16-1-1) moves into the Elite 8 (quarterfinals) for the first time since the 1990 season when they reached the semifinals. Starr’s Mill finishes its season at 14-5-1 overall. 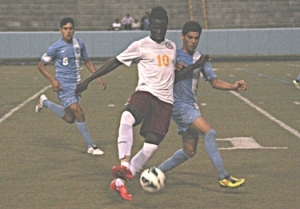 Tucker’s Jerome Mzama (10) battles a Meadowcreek defender for the ball. Mzama had the go-ahead goal for the Tigers in their 2-0 playoff victory. (Photo by Mark Brock)

The No. 10 ranked Tucker Tigers were geared up for a rematch with Meadowcreek in the second round of the Class 6A Boy’s State Soccer Playoffs and came away with a 2-0 hard fought victory to advance to the Elite 8 for the second time in school history.

Meadowcreek had taken advantage of four Tiger players out during the regular season meeting to win 7-1. The Tigers (15-2-0) were determined to not let the Mustangs (12-6-1) repeat their victory.

The Tiger defense did a good job recovering on Meadowcreek runs throughout the game except early on when a pair of big saves kept the game scoreless. The continued big plays by the Tucker defense led to a couple of scoring opportunities in the final 15 minutes of the first half, but the Meadowcreek goalie was up to the task turning away two solid attempts from the Tigers to send the game to the half tied 0-0.

Just over eight minutes into the second half the Tigers struck as Checika Fofana slipped a pass past the Mustang defense to teammate Jerome Mzama who put it into the left corner past the diving Mustang goalie for a 1-0 Tucker lead.

Tucker continued to frustrate the Mustang offense with great plays in front of the goal to get the ball out and sending it the other direction.

One such play allowed Fofana to dribble down the middle of the field with teammates on either wing drawing defenders away from their streaking teammate. Fofana took advantage and went right at the Mustang goalie before drilling the ball into the left corner for a 2-0 lead with 20:41 to play.

Tucker came up just short on making it 3-0 as the Mustang goalie stopped another run at the net by the Tigers with 19:00 minutes to play. Tucker managed to control the ball most of the final 19 pushing it into the Meadowcreek defensive zone and eating up the clock on the way to the win.

Class 5A Girls
The Dunwoody Lady Wildcats had their region winning season come to an end with a tough 1-0 loss to No. 1 ranked McIntosh (18-2-0) at North DeKalb Stadium on Tuesday.

Dunwoody (11-6-1) battled McIntosh the entire game pushed the No. 1 ranked team to the brink before falling. Dunwoody won the Region 6-5A title this year.