Stephenson Falls in Class 5A Doubleheader to Union Grove 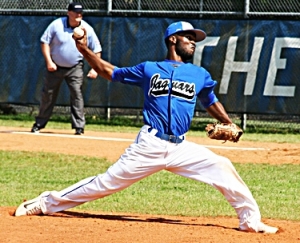 Stephenson’s Terrell McCall pitched seven strong innings to give the Jaguars a chance in an extra inning loss to Union Grove. (Photo by Mark Brock)

Two big innings at bat by Union Grove proved the difference as the Stephenson Jaguars saw their season come to an end in the Class 5A Baseball State Playoffs second round.

The Jaguars (19-4) lost the opener 8-2, but had rallied for a 5-2 lead in the top of the fifth of the second game and looked to be on the way to tying the best-of-three series at one game apiece and force a third game on Thursday.

Union Grove had used the momentum of a six-run rally in the top of the ninth of the extra inning first game 8-2 win to take a 2-1 lead as the teams headed to the top of the fifth inning.

The Jaguars had other thoughts than losing the second game as Tekwaan Whyte tripled to the right field corner with one out to put the tying run at third with two outs. Bakari Gayle walked and DJ Neal followed with a hard hit single to left to knot the game at 2-2 with two runners on and just one out.

Kameron Armstrong followed with a walk to load the bases for Christian Griffin. Griffin delivered the big hit the Jaguars had missed out on most of the day with single to center to score Gayle and Neal to give the Jaguars a 4-2 lead. Armstrong would score on a passed ball for the 5-2 Jaguar lead.

The Jaguars went down in order in the sixth and pitched Tekwaan Whyte left the game after 5 strong innings. Union Grove loaded the bases with a pair of walks and an infield bunt single to set the table for Union Grove’s Jake Kaufman.

Neal reached on a one-out walk for the Jaguars and stole second and third, but Union Grove closer A.J. Spencer once again closed the door on Stephenson with a strikeout and pop up on the infield to end the series.

The two teams battled to a 2-2 tie after seven innings in the first game and needed two more innings to decide the game.

Both teams left runners stranded at second in the eighth, but Union Grove would have five hits in the six-run ninth led by RBI hits from Connor Barnell and Austin Crisp to take the 8-2 lead.

Stephenson would got a pair of runners on base as Latrell Wyatt walked an d Whyte singled before Spencer got another infield pop up to end the game. 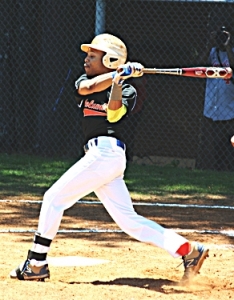 The Columbia Eagles and Locust Grove go to a third game in their best-of-three Class 4A state playoff series after splitting a pair of games on Wednesday at Locust Grove.

The Eagles got the early jump on Locust Grove by scoring six runs in the top of the first inning. The lead grew to 7-1 in the fourth as the Eagles worked to get the game 1 victory.

Locust Grove (24-5) would pull within 7-4 in the sixth, but Columbia (21-8) was able to shut the home team down in the seventh to secure the victory and the series lead.

Columbia got out to a 1-0 lead in the first inning of the nightcap. Locust Grove would answer in the second to knot the game at 1-1.

Locust Grove then reeled off 6 unanswered runs to even the series at 1-1 with a 7-1 victory and force game 3 today (Thursday) at 5:30 pm at Locust Grove.