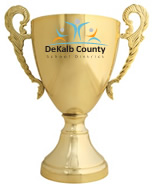 A strong sports program is a vital part of student life and provides a balance with academics, which the students need for a well-rounded high school experience. Young bodies need physical exercise, and students also learn to work together as a team in many of the sports programs offered.

Basketball, baseball, football, soccer, track, wrestling and cheerleading are offered at the middle school level, and eighth graders can participate on the junior varsity level at the high schools, if a sport is not offered for them in the middle school.

DeKalb also has an American Association of Adapted Sports Program (AAASP) offering junior varsity participation in wheelchair soccer, basketball and football throughout the school year. The program has won 4 junior varsity state championships and two varsity titles as the home of AAASP.

The school district went 11 years without a title until Druid Hills won the 1951 boys track title to start a string of 48 consecutive years with at least one state title coming home to DeKalb County Schools. The streak ended in 1999 as no state titles were won. A new streak began in 2001 as Lakeside won the boys tennis title to start the current streak of 21 years. The 320 state titles have come from 25 different schools, (seven of which are no longer in existence) and the Adapted Sports Programs.

Lakeside leads the way with 41 state titles, with Dunwoody a distant second with 29 state titles to the school’s credit. Southwest DeKalb is third with 24 while Tucker and Druid Hills hold 21 state titles apiece and Columbia 18 to round out the Top five.

Boys’ track has outshone the other sports in the school system bringing home 47 state titles, while girls’ track follows with 31. Track has a 14-year run going with at least one state track championship and 21 total (12 girls, 9 boys) during this streak.

Wrestling has third highest total with 29 followed by boys’ basketball with 25 (boys and girls combined have 45) and girls’ gymnastics with 20 and boys’ cross country and girls’ basketball joined the 20 state title group in 2016 as part of the Top 5 athletics programs in DCSD.

Miller Grove’s 2016 Class 5A Boys’ Basketball State Championship was a big one for DCSD as it marked the 300th state title for the district. Repeat state titles in boys’ track in 2016 by Southwest DeKalb (5A) and Cedar Grove (3A) gave the District 6 for the year.

Track (1)
Stephenson Jaguars captured the Class 4A State Track and Field Championship 74-70.5 over North Oconee. The Jaguars trailed by over 20 points going into the final day of competition and clinched the title with a win in the final event of the day, the 4×400 relay.