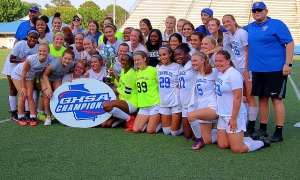 A four-goal flurry in the first eight minutes and 15 seconds of the Class 5A girls’ state championship match put the Lady Bulldogs in control against the Knights (15-7-1) and they never looked back.

The sophomore trinity of forwards Ansley Harrison, Kara Croone and Solai Washington did what they do best by pressuring the opponent’s defense and teamed up for the quick four goals as possible let down after knocking off No. 1 Blessed Trinity 3-1 in last week’s state semifinal was not a factor.

Harrison got a steal along the left sideline and raced past the Knights’ defense and put a shot past the diving keeper into the right lower corner of the goal just one minute into the game.

Leading 1-0, Croone took a pass from Washington just 1:17 seconds later and put the ball behind the goalie to make it a 2-0 lead and the rout was on early.

Less than two minutes later Harrison scored her second goal of the game at the 35:45 mark of the first half as she gathered in a deflected pass from Croone to beat the keeper again to make it 3-0.

Washington got into the scoring act exactly four minutes later as she picked up a deflection off a Midtown defender and raced up the right side with an eye on the goal. She took aim from the right side less than 10 yards out and blasted a shot to the keeper’s left. The keeper barely tipped the ball with her fingers as he found the left lower corner of the goal to make it 4-0.

The final 31 minutes of the first half was relatively quiet as the Midtown goalie turned away four shots on goal by the Lady Bulldogs to keep the deficit at 4-0.

Chamblee’s lead was still 4-0 halfway through the second half when a bit of pressure by Midtown turned into a goal off a couple of deflections in front of the goal to close the gap to 4-1 with 25:27 remaining.

The Lady Bulldogs turned up the heat after giving up the goal. The score by Midtown woke up a sleeping giant known as “The Trinity,” as the three forwards are referred to by the team, picked up where they left off early in the first half.

As the clock ticked under 25 minutes, Chamblee was already taking shots on goal. Midtown keeper Allie Paleon turned away two quick kicks in a span of seconds only to have Harrison put the second deflection into the goal to make it 5-1 and complete a hat trick with 24:48 to play.

Washington picked up her second goal of the match with another hard shot off the keeper’s hands into the right corner to push the Chamblee advantage to 6-1 just over a minute later.

Croone collected her second goal of the match as she broke away from the Midtown defense and beat the keeper to make it 7-1 as the clock moved under 20 minutes to play.

The sophomore picked up the second hat trick of the match with 12:58 to play as a shot bounced off the right goalpost directly to Croone who capitalized to make the final margin of 8-1.

Chamblee also set another record in its historic season as the Lady Bulldogs set the school and DeKalb County Schools mark for wins in a season at 22-1-1. Chamblee also outscored their five playoff opponents 37-3, including a 3-1 semifinal victory over then No. 1 Blessed Trinity as North DeKalb Stadium last week.