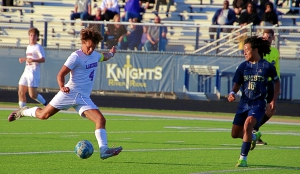 Lakeside senior Sam Newmyer (4) scored the Vikings only goal in a tough 3-4 PK loss to River Ridge in the Class 6A boys’ quarterfinals. (Photo by Mark Brock)

The Lakeside Vikings fought for the last 29 minutes a man down before falling 4-3 in the penalty kick shootout to the River Ridge Knights in the Class 6A soccer state playoffs quarterfinals at River Ridge on Tuesday night.

Lakeside (17-1-1) and River Ridge (15-6) were knotted at 1-1 with 9:01 to play when a collision at midfield stopped play. The referee gave Lakeside’s Mauricio Garcia a red card that would put the Vikings down a man the rest of the way.

The Vikings came close to taking the lead on a pair of occasions including a shot just knocked away by River Ridge keeper Gracen VanGilder to keep the score at 1-1 with 1:57 left in regulation.

A long desperation shot by River Ridge was hauled in by Lakeside goalie Finn Marchinsen in the final 10 seconds of regulation and the teams went to the two 10-minute overtime periods.

The first half of overtime went quietly, but the second overtime had both teams coming close to scoring twice only to have the goalie’s turn away shots, the last by Lakeside’s Marchinsen with two second left to send the game into the penalty kicks.

A miss off the crossbar on Lakeside’s third attempt allowed River Ridge to go up 3-2. Ian Bouer-Schlitt made his penalty kick to tie it at 3-3 before River Ridge’s Chris Asbridge converted his PK to put the Knights up 4-3.

Lakeside needed a make by Rohan Blackwell to keep their hopes alive, but VanGilder got his hands out to deflect Blackwell’s shot and give River Ridge the victory.

A defensive struggle throughout the two teams battled to a 0-0 tie until River Ridge (15-6) broke through with a goal by Rezin Samtag on an assist from Mike Dean to go 1-0 with 5:12 left in the first half.

The game was still 1-0 in favor of the Knights when the Vikings turned up the pressure and scored what would have been the tying goal as Laurence Humphries put in a rebound with 28:20 that sent Lakeside and its fans into what would be a short-lived celebration.

A late offsides call was signaled and after a discussion by the referees the goal was waved off to keep River Ridge up 1-0.

Sam Newmyer knotted the game at 1-1 at the 18:57 mark as Maddox Lyerla moved quickly up the field and split a pair of defenders with a pass to Newmyer who put the ball in the net for the tying goal.

The No.2 ranked Chamblee Lady Bulldogs (20-1-1) is the last DeKalb soccer team standing as they host a Class 5A girls’ semifinal against No. 1 Blessed Trinity (19-1-1) on Thursday (April 28) with first kick set for 6:00 pm at North DeKalb Stadium.