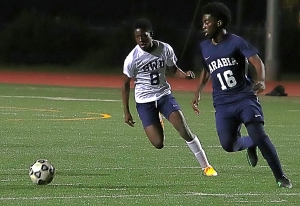 Southwest DeKalb’s Ezekial Babara (8) races to the ball against Arabia Mountain’s Mulbah Guilavogui (16). Babara had a goal and an assist on the night in the Panthers’ 4-1 win. (Photo by Mark Brock)

Three goals in the final 19:46 of the game propelled the Southwest DeKalb Panthers to a 4-1 victory over the Arabia Mountain Rams to earn a split in non-region soccer games at Godfrey Stadium on Tuesday night.

The two teams played almost 60 minutes of scoreless soccer in the nightcap before Southwest DeKalb’s Abdul Lawal got a tap-in goal off a deflection in front of the goal for a 1-0 lead at the 21:31 mark of the second half.

Arabia answered right back just one minute and 11 seconds later as Drake Kemp found a loose ball out front and knocked it in to knot the score at 1-1 with 20:20 to play.

Forty-four seconds later the Panthers (5-8) took the lead for good as Corey Ficklin scored with a ball off his chest on a free kick by Kimani Groves for the 2-1 advantage.

Just under three minutes later Ezekial Babara scored to make it 3-1 in favor of the Panthers giving Southwest three scores in just under five minutes of playing time.

Southwest closed out the scoring as Mishael Ukoh picked up a deflection off a shot by Babara with 4:54 to go to make the final of 4-1.

Arabia Mountain (1-8-1) missed several chances in the second half as Southwest DeKalb goalie Shawn Vactor turned away five shots while allowing just the one goal in a crowded box.

The two teams combined for 20 shots on the goal in the game including nine in the scoreless first half. Arabia Mountain’s keeper Parker Duncan had five saves in the first half. 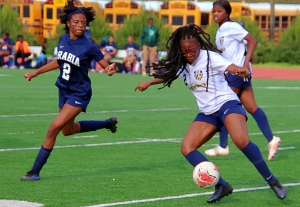 Southwest DeKalb’s Bernice Kpotogbe (2 in white) turns up the field as Arabia Mountain’s Ayana Peterson (2 in blue) comes up to defend. Arabia Mountain made a first half goal stand up in an 1-0 win. (Photo by Mark Brock)

GIRLS: Arabia Mountain 1, SW DeKalb 0
The Arabia Mountain Lady Rams made a late first half goal stand up on the way to a 1-0 victory over the Southwest DeKalb Lady Panthers in the opener on Senior Night for the two schools.

Both teams had six shots on goal in the first half with both keepers making plays to keep their team in the game.

Southwest DeKalb keeper Marissa Forbes had six saves in the first half including a quick reaction on a pair of in close shots at the 18:32 mark to keep the game scoreless.

Arabia Mountain’s Fredia Lansana turned away five shots in the first half to keep a clean slate including two on the same play with 17:50 left in the half to keep the gam

Sarah Samu pushed the ball past the Southwest DeKalb defense and cruised in for a goal with 14:55 to play in the first half for the lone goal of the game.

Shots were at a premium in the second half as both teams managed just two shots on goal and both keepers turned them away. Three of the shots came in the first nine minutes of the half two against Arabia Mountain’s Lansana and one against Forbes.

The final attempt came with 17:40 to play as Araba Mountain got a shot off that was again turned away by Forbes.

Arabia Mountain improved to 3-6-1 on the season while Southwest DeKalb fell to 2-11-1 overall.