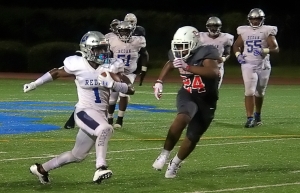 Several lightning delays turned a DeKalb doubleheader into an extra inning affair that ended after midnight with Redan and Miller Grove coming out with shutout wins at Adams Stadium on Friday night.

The opening game featuring the Redan Raiders (1-0) and Druid Hills Red Devils (0-2) had a delayed start and then three lighting delays before the first half could get finished on the way to the 40-0 Raider victory.

In between the delays, Redan got out to an 18-0 lead on a pair of Antoine Hector touchdown passes of 39 yards to Xavian Green and 11 to Jammeel Jones to go along with a Votarres Thaxton 16-yard touchdown run.

Thaxton added touchdown runs of 11 and four yards in the second half as he finished with 110 yards rushing and three touchdowns on 16 carries. Daemon Jones added a one-yard touchdown run as Redan close out the win.

Hector finished with 137 yards passing and the two touchdown passes. The Raider defense held Druid Hills to 13 yards rushing on 27 carries and made 12 stops for negative yardage. 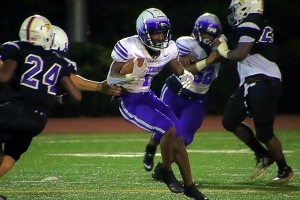 Miller Grove 47, Lakeside 0
Miller Grove running backs Jayden Brown and Ta’Jon Corbitt both rushed for over 100 yards and two touchdowns each to lead the Wolverines to their 47-0 win in the nightcap at Adams.

Corbitt added a seven-yard TD run in the scone period and Roddrigus Tracy returned a fumble 45 yards with 1:30 left in the half to put Miller Grove up 27-0 at the break.

The Wolverines scored twice in the final three minutes of the third quarter on a 16-yard run by Corbitt and a Cameron Caldwell recovery of a blocked punt in the end zone to make it 40-0. The final score came on a Yahlmin Novotny two-yard run to close out a nine-play, 84-yard drive that took 7:37 off the fourth quarter clock.

Brown finished with 146 yards rushing and two touchdowns on 14 carries while Corbitt who saw most of the action in the second half closed out with 163 yards and his two TDs on 17 carries. The Wolverines rushed for 377 yards in the game while holding the Vikings to just 14 yards on 20 carries, including 8 negative plays.

Stephenson 22, SW DeKalb 13
Stephenson’s Rahim Diarrassouba scored on both sides of the football to help lead the Jaguars (2-0) to a 22-13 victory over the rival Southwest DeKalb Panthers (0-2) at Hallford Stadium on Friday night.

Diarrassouba caught a 47-yard touchdown pass from Marte Barton and later extended the Jaguars’ lead to 13-7 with a 20-yard interception return for a score.

Sadir Ryan had touchdown passes of 37 yards to Ali Dargan and 23 yards to Ke’Ante Thornton as the Panthers knotted the game at 13 all.

A pair of big defensive stands by both teams had Southwest DeKalb in a punting situation and the snap went out of the end zone to give Stephenson the lead for good at 15-13. A Cheik Kita eight-yard touchdown run with just over a minute to play sealed the 22-13 win giving the Jaguars and 11-6 lead in the rivalry.

Jalen Patterson made the big plays when needed in the win with an 80-yard kickoff return for a touchdown and a 40-yard touchdown catch from Devontae Cemexan to seal the victory.

Clarkston 20, Berkmar 19
The Clarkston Angoras broke a 21-game losing skid on Friday night with a 20-19 victory over Berkmar.

Clarkston scored on their opening drive to take a short-lived lead on a 35 yards touchdown run by sophomore Kyle Bryant.

Trailing going into the fourth quarter when senior Kennedy Bass stepped up with two big plays. He had a scoop and score on a punt set up by two big sacks by senior Christ’Vie Okitanguwo and another quarterback pressure to force the fourth down. He would later pick off a Berkmar pass to preserve the win.

Angora quarterback Jarmarcus Jenkins scored on a 20-yard run to give Clarkston a 20-13 lead. Berkmar would score before Bass’ interception to pull within in 20-19, but the PAT was no good. 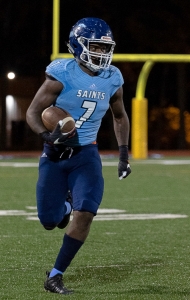 Cedar Grove 52, Tucker 10
The Class 3A No. 1 ranked Cedar Grove Saints jumped out to a 24-0 lead and cruised to a 52-10 win in their season opener against the Tucker Tigers at Godfrey Stadium on Friday.

Rashod Dubinion made it 24-0 with his 35-yard touchdown run. Cedar Grove (1-0) took a 31-3 lead into the half on a touchdown reception by Barry Jackson.

Boden Walker had a 44-yard TD run, Damarcus Smith a six-yard TD run and Janiran Bonner added an acrobatic TD catch to round out the scoring.

Rayton opened with a 74-yard touchdown run on the first offensive play for the Rams to set the tone for the night.

Dunwoody 19, North Springs 6
Porter LeDoyen and Colin Couch combined for 211 yards rushing and three touchdowns to lead the Dunwoody Wildcats to their first win of the season 19-6 on the road at North Springs.

LeDoyen ripped off 138 yards and one touchdown on 13 carries while Couch had two scores and 73 yards rushing on 10 carries as the Wildcats (1-1) finished the night with 297 yards of offense, all on the ground.

Jack Wichman had two interceptions and Ben Harris had five tackles to lead the defense that held North Springs to 53 yards rushing and just six points.

Chamblee 54, Lumpkin Co. 7
Fabian Walker threw for 281 yards and four touchdowns as the Chamblee Bulldogs picked up a 54-7 road victory at Lumpkin County on Friday night to improve to 2-0 on the season.

Walker connected with Jordan Thornton on six passes for 96 yards and two touchdowns while adding touchdown strikes to Jameel Avery (4 receptions, 74 yards) and a 50-yard toss to Sydyk Ross. Larry Harris added 68 yards and a pair of touchdowns on six carries out of the backfield. Will Burton was a perfect 6-6 on PATs to improve to 14-14 on the year.