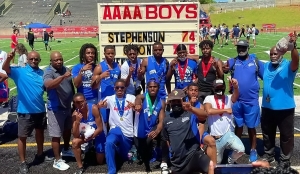 “I can’t say enough about the kids,” said Jaguar track coach Donald Sellers. “They really stepped up when they needed to get it done.”

Things started to turn when they hit the track in the 4×800-meter relay picking up a strong second place finish with a time of 8:27.63 by the quartet of Christian Clowers Moses Craine, Zahir Raheem and Musab Boynton.

“That was kind of the starting point for us as the guys made a heck of run in an event most didn’t expect much from us,” said Sellers.

Performing well in the final event of the day for the Jaguars put them at 14 points trailing Marist (46.5), North Oconee (40.5) and Jefferson (36) with a team total of 14 points after the first two days of competition. Marist collected 11 points in the 3200-meter run and 15 in the 1600 to up its total to the 46.5 and North Oconee tacked 10 more and Jefferson picking up two in events the Jaguars did not have any competitors. 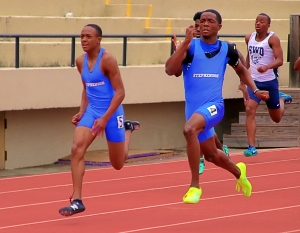 The 4×100-meter relay team of Jace Coleman, Bradley Favors, Cordell Andrews and Rahim Diarrassouba clocked a time of 42.23 to take the gold ahead of Jefferson to open the track finals on last day of competition. Stephenson still had its work cut out trailing by 16.5 points to current third place occupant North Oconee (40.5), 20 to Jefferson (44) and current leader Marist (46.5).

Despite a win by North Oconee’s Jordan Fick and a third place finish by Jefferson’s Carter Stephenson in the 110-meter hurdles, the Jaguars picked up five big points by Isaiah Screen in the event to keep the pair within reach. The Jaguars had 49 points with Jefferson sitting in second with 54 and North Oconee (56.5) in first.

Marist collected 15 points as three runners tallied points in the 800-meter run to pull back in front with 62.5 points followed by Jefferson (59), North Oconee (56.5) and Stephenson still sitting with 49.

A bit of bad luck struck the Jaguars in the 300-meter hurdles as Dorian Helms finished second, but was disqualified for an apparent hooking of the hurdle. North Oconee’s Fick scored the gold to add 10 points to push his team in front with 70.5 points and Jefferson picked up 8 more to move into second with 67. Stephenson dropped to third with 64 and Marist was in fourth with 62.5.

Stephenson and Marist both had teams in the final event of the championships, the 4×400-mter relay, with the opportunity to pass the two leaders who failed to qualify a team for the finals and a chance at the title.

“It is very hard to turn around and run an event following a tough call like Dorian got in the hurdles,” said Sellers. “But the guys got together and Bradley (Favors) had some good things to say to Dorian and his teammates to help get mentally ready for that final test.”

It was Sellers’ second state title, but first since his 2002 squad captured the Class 5A championship in what was then the largest classification.

“You are up in the clouds when you win state,” said Sellers. “Then you start coming down and thinking you want to get the next one. It never gets old bringing home that trophy.”

It was Stephenson’s third boys’ state title tying the program with its girls’ counterpart and girls’ basketball with three each and giving the school its ninth state title overall. It was the first boys’ state track title for DeKalb since Cedar Grove’s 2018 (one of four consecutive) Class 3A championship. It was the 14th consecutive year for DeKalb to bring home at least one state track title (boys and girls) dating back to 2007 (no championships held in 2020). 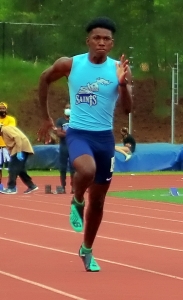 Class 3A at Albany
The Cedar Grove Saints put in one of four boys’ Top 10 finishes led by a gold medal in the 4×400-meter relay to tally 36 points to tie North Hall for fifth in the Class 3A state championships.

The 4×100 relay team of Joseph Slaughter, Eric Jordan, Tre’Von Ferrell and Oral Ashe picked up the silver medal with a time of 42.24, just .21 seconds behind Liberty County.

Class 2A at McEachern
The Towers Titans pulled out a third place finish in the Class 2A state championships at McEachern High School while collecting four gold medals along the way to 54 points.

Pace Academy was first with 88.5 points followed by Washington County with 58 and Columbia finished in a tie for 29th with three other teams.

Patrick added to the total with a gold in the 110 hurdles with a time of 14.94 and Logan leapt to a gold in the high jump going over the bar at 6-feet, 8 inches to win. Hobson score a silver in the long jump as he went for 23-feet, 2 inches in the event.

Columbia’s Jaurice Hardrick accounted for the Eagles points with a fifth place finish in the triple jump at 42-feet, 8.5 inches.

Stone Mountain’s Henry Kofowo made it a clean sweep in the shot put with a victory in the Class 5A track championships. He also won the Region 5-5A and DeKalb County titles. (Photo by Mark Brock)

Class 5A at Carrollton
The Southwest DeKalb Panthers eased into the Top 10 of the Class 5A state track championships at Carrollton High School with 26 points to pick up one of the four Top 10 finishes for boys’ squads from DeKalb.

Chamblee came up one point shy of a Top 10 in a tie for 11th with Calhoun with 20 points. Stone Mountain was in tie for 21st with 10 points with five other teams and Clarkston was in a tie for 32nd with two other squads.

Southwest DeKalb’s Aric Seay, Ke’Antae Thornton, Xzaviah Taylor and Isaiah Taylor finished off the meet in grand fashion taking the gold medal in the 4×400 relay with a time of 3:19.13 with a .62 seconds victory over Clarke Central.

Stone Mountain picked up a gold medal as Henry Kofowo claimed the shot put title with a toss of 53-feet, 5 inches. He also won the Region 5-5A title and the DeKalb County Championships crown.

Class 7A at McEachern
The Dunwoody Wildcats came in at 19 in the Class 7A state championships led by its trio of pole vaulters to tally 13 points overall.

Harrison Kopp pulled off a bronze medal with a vault of 15-feet even followed in fourth by Alon Rogow (14 feet) and an eight place tally for jack Arant (13 feet). Alexander Tate added a point to the total with his eighth in the 100-meter dash (11.76).

Class 6A at Carrollton
Tucker finished in a tie for 35th with four points in the Class 6A state championships. Abedelemejid Kerebo was seventh in the 800 and the 4×800 relay team was seventh.

See link below for all the DCSD State Track Results: