Stephenson held off a late charge by defending champion (2019) Arabia Mountain to capture the title by a slim 96-93 margin.

Ashley Brown scored a pair of gold medals for Arabia Mountain in the comeback attempt winning the triple jump (30.05.00) and the 300 meter hurdles (55.76). 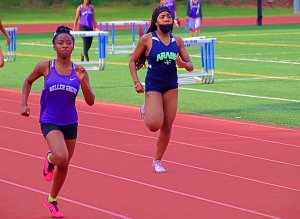 As the teams came into the final event Stephenson was holding a 92-83 edge with Arabia Mountain needing a victory in the 4×400 meter relay to have a shot. The Lady Rams captured the title in 4:20.63, but Stephenson scored four points to keep the lead and take the team title.

Redan finished third with 83 points led by gold medal performances by Ceony Jones and Kennedy Leach. Jones claimed the 1600 meter run title in 7:11.73 to go with a silver in the 800. Leach won the high jump with a leap of 4 feet, 8 inches.

The victory by Stephenson was the Lady Jaguars third title in the six years (2015-2019, 2021) of Junior Varsity County Championships competition. 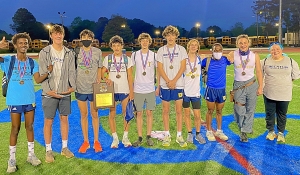 BOYS CHAMPIONSHIPS
The Decatur Bulldogs racked up 69 of their 99 points in distance events to cart away their first ever DeKalb County Junior Varsity Track Championship over Redan (84) at Buck Godfrey Stadium. 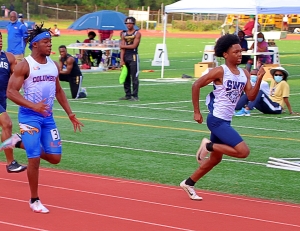 Stephenson finished fifth, only the second time in six years the Jaguars did not finish first, led by a gold medal from Kwabena Flowers in the 400-meter dash (51.97).