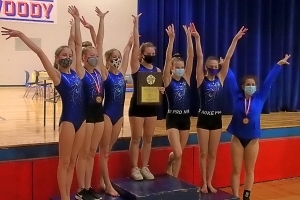 The 65th annual DeKalb County School District (DCSD) Gymnastics County Championships proved a memorable one for the Chamblee Lady Bulldogs as they captured their first ever county gymnastics title in the meet held at Dunwoody on Tuesday night.

Wolf won the uneven parallel bars with a score of 9.200 just 0.05 ahead of Lakeside senior Emma Cohen. She took the balance beam gold medal with a .20 win over teammate Rachel McGuiness.

Cohen closed out her senior regular season with three 9.000 or better scores to capture the All-Around title at the county championships with a total score of 35.750. She scored a 9.000 in her floor exercise gold medal winning performance, scored a 9.150 for silver in the uneven parallel bars and 9.300 on the vault for another silver medal finish. Her lowest score came on the balance beam with an 8.300 to take the bronze medal. 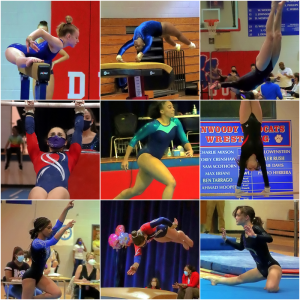 Chamblee freshman Rachel McGuiness (33.450) was fourth followed in order by Dunwoody sophomore Lyla Biggs (30.850) in fifth and Arabia Mountain senior Ashlynn Carthan (30.100) in sixth. McGuiness had a best finish of second in the balance beam (8.500) to aid her fourth place finish. Biggs best finish was fourth in the vault (8.600) and Carthan grabbed a bronze medal in the floor exercise (8.500) for her top finish.

Runner-up Lakeside had won six of the last eight county titles with Redan winning in 2015 and Druid Hills in 2018. The Lady Vikings hold county leading 22 titles including a streak of 10 consecutive championships from 1972-81. Third place Dunwoody has seven titles all won by Casandra Watkins who retired before this year.

See link below for full list of medal winners: