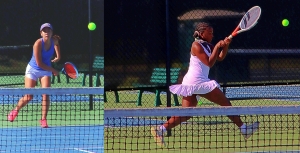 Chamblee traveled to Sugar Creek Tennis Club for a Region 5-5A tennis clash with Southwest DeKalb on Monday afternoon and came away with a pair of 5-0 wins.

The Lady Bulldogs improved to 9-2 on the season with their win over the Lady Panthers. Chamblee’s Isabelle Coursey opened the match with a 6-0, 6-0 victory over Southwest DeKalb’s Lauren Johnson at No. 1 singles.

At No. 2 singles, Chamblee’s Kennedy Talbot matched Coursey’s performance with a 6-0, 6-0 win over Southwest DeKalb’s Katelyn Bennett. Genesis Pickens closed out play giving Chamblee its third point of the match with a 6-2, 6-2 match victory over Aona Harrison.

Southwest DeKalb forfeited the girls’ doubles matches due to being shorthanded for the match.

All five position matches were played on the boys’ side with the Bulldogs upping their record to 7-4 on the season with the 5-0 triumph over the Panthers.

Chamblee swept the singles by identical 6-0, 6-0 scores beginning with the No. 1 singles win by Chamblee’s Andrew Pietkievicz over Southwest DeKalb’s Malik Croom.

Hap Howell made it 2-0 in favor of the Bulldogs with his No. 2 singles victory over Landon Combs. Rudy Bhukanvala finished the singles points winning against Southwest DeKalb’s Isaac Williams.

The match was clinched for the Bulldogs with a 6-1, 6-0 win at No. 1 doubles by Kai Henderson and Luca Borisov over the brother duo of Zair Harrison and Nasir Harrison.

Nathan Aresh and Gunnar Hagan teamed up to make the clean sweep for Chamblee with a 6-0, 6-3 victory over Southwest DeKalb’s Bryson Hairston and Latif Reid.

The teams will be gearing up for the Region 5-5A tournament on April 13 and 14 when the students return from Spring Break. The top four seeds from the region earn berths into the Class 5A state tournament scheduled to begin on April 20.