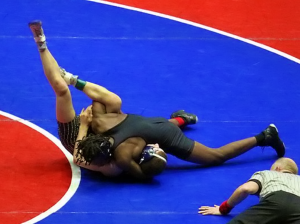 Mills won the Class 3A 108 weight class title as a freshman and has followed that up with a 14-0 record with four consecutive wins in the Class 5A 126 class to make it back-to-back state titles for the sophomore.

The title match has Mills facing off with Bryce Kresho (22-3) of Cass. Mills pinned Kresho at the 4:41 point of the match to capture the gold medal.

He received a bye in the first round and opened his run to the title with a second round decision of 13-7 over Easton Bishop of Woodland-Cartersville to advance to the quarterfinals.

The next opponent was Jonah Lavender of Union Grove who fell to Mills via pin fall at the 3:34 point of the match. The semifinal match turned into a major decision victory of 19-8 for Mills over Cartersville’s Giles Turner (26-8). 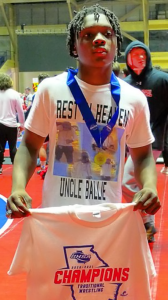 Stone Mountain’s Jordan Shannon finished fifth in the 195 weight class to help the Pirates to a 16th place finish in the team standings. Shannon reached the semifinals with wins over Chase Barney of Eastside (Dec 9-6), Jeffery Gibson of Chapel Hill (Dec 7-6) and Jermaine Lloyd of Eagle’s Landing (Fall 3:21) to get to the semifinals.

Shannon lost by pin fall to Jaxon Smith of Woodland-Cartersville in the semis and then dropped the consolation semifinals match via pin fall to Jason Vincente of Calhoun.

Southwest DeKalb 25th in the team standings led by a fourth place finish from Jerrell Baskins in the 170 weight class. A loss in the quarterfinal round put Baskins in the consolation bracket where he defeated three opponents to reach the bronze medal match.

Baskins defeated Mundy’s Mill’s Christian Brown by a sudden victory and won in round five with a 10-5 decision over Gabriel Anderson of Jones County. He reached the bronze medal match with a hard fought 3-1 decision over Coffee’s Nolan Smith.

He battled Walnut Grove’s Jonathan Paramore (40-1) for the bronze coming up short in an 11-6 decision.

Rush won five matches, three by pin falls on his trek to the bronze medal. Rush fell to Camden County’s Deonte Dozier by pin fall in the quarterfinals then reeled off four consecutive wins to claim his prize.

A bounce back victory over MeEachern’s Ty’Jon Cash took just 56 seconds to get a pin fall and move Rush into the next round. He followed up with a tough 6-4 decision over Mill Creek’s Gavin Guerra. Rush moved into the bronze medal match via an 11-5 decision over Harrison’s Peyton Quatharner.

Rush met Camden County’s Dozier for the second time in the tournament and evened his mark against the wrestler that gave him his only loss of the tournament. After losing to Dozier in less than minute in their quarterfinal match Rush rebounded for a pin fall just 2:44 into their rematch to claim the bronze medal.

Scott responded with two pin fall wins over Jordan’s Kiera Johnson (Fall 4:45) and Mt. Zion’s Migdalys Ramos (Fall 4:39). She came up short of the bronze medal match with a 7-1 loss to Samantha Hauff of Apalachee.

Evans reached the quarterfinals of the 172 weight class with a pair of pin fall wins over Lamar County’s Lea English (3:25) and Campbell’s Jazlyn Manuel (1:18). But a semifinal loss by pin fall to Alexander’s Dream Santiago put her into the consolation semifinals. Skyy Hargrove of Kendrick prevented Evan’s chance to wrestle for third and the bronze medal with a tough 3-2 decision.