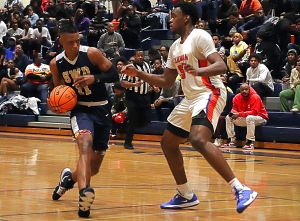 Southwest DeKalb’s Eugene Brown III (11) drives against Columbia’s D’Kwon Harris (35) during a regular season Region 5-5A contest. Brown and his Panther teammates take on No. 8 ranked Cedar Shoals in the Class 5A semifinals on Saturday at Fort Valley State’s HPE Arena with tip off set for 8:00 pm. (Photo by Mark Brock)

The DeKalb County basketball banner is being flown by just one team as the Southwest DeKalb Panthers are the only team heading to the GHSA State Basketball Playoffs Final Four on Saturday at Fort Valley State University.

Senior Jacorry Gist has been a key player in the playoffs as well hitting for 12.7 points, 6.3 rebounds and 4.3 assists. Junior guard Jarrett Walton has contributed 9.0 points and 4.0 assists in the three victories.

Gist helped seal the 52-50 overtime hitting free throws late to put the Panthers up four (54-50) before Clarke Central got a meaningless basket at the buzzer. Southwest DeKalb had rallied from a 40-32 fourth quarter deficit to take a 44-42 lead before finally going to overtime.

The Panthers are in the Final Four for the second consecutive season having lost to Buford a year ago. It is the team’s fourth overall including a state championship loss to Miller Grove in 2012 and a 1998 run which ended in a loss to Savannah.

Southwest DeKalb is 1-0 against Cedar Shoals in the playoffs. The win came by a score of 72-69 in the second round of the 2012 Class 4A state playoffs.

Cedar Shoals has playoff wins over Carver-Atlanta (72-47), Wayne County (52-50) and Lithonia (50-47) to reach the Final Four. The Jaguars rallied from eight points down in the fourth quarter for the win behind Quincy Canty’s two big three-points as he finished with 13 points and 9 rebounds. Canty’s 13 points all came in the second half, including the three-pointer with 27 seconds left to give the Jaguars the lead for good at 46-43.

Jerdarion Colbert had 11 points in the win over Lithonia hitting two free throws along with Tyler Johnson to seal the win in the final 15 seconds.