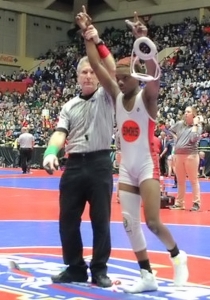 Mills joins his brother Antonio Mills (2019) as a gold medal winner for Stone Mountain while leading the Pirates to their second consecutive Top 10 finish at state and 14th overall. The performance moves the Pirates into a seventh-place tie in DeKalb with former DeKalb school Walker with the 14 Top 10 finishes.

The freshman opened with a bye in the tournament then went on to win three consecutive matches. He pinned Brayden Adams (Islands, 62-9) at the 5:18 mark of his match to move on to the semifinals. He followed that victory up with a 9-2 decision over North Hall’s Dawson Thompson (85-14) to earn a trip to the championship match.

Mills clinched the state gold with a pin of Jefferson’s Chaz McDonald at the 3:41 mark of the match.

Stone Mountain senior Derek Price picked up a silver medal in the 152-pound class by winning his first two matches after a bye to reach the finals. Price defeated Franklin County’s Charlie Henkel via fall at the 2:36 mark of his quarterfinal match.

Price won an 8-4 decision over Fannin County’s McCay Turner (78-21) in the semifinals to move on to the championship match. Price dropped a very tight match via a 6-5 decision to North Hall’s Dalton Battle (63-10) to finish with the silver.

Stone Mountain also had a pair of girls’ finish fourth in the girls’ championship. Daisy Gilleylan, a silver medalist in the inaugural girls’ state tournament last year, finished fourth in the 132 class and Kieara Parsons took fourth at 225.

Class 6A
Three DeKalb teams finished in the Top 30 of the Class 6A team standings led by Stephenson’s 19th finish with 30 points in the tournament.

Stephenson’s Micah Godwin (25-4) led the way for the Jaguars as he beat Dunwoody’s Charles McCown for the second time in the tournament via an 8-2 decision for the silver medal in the 220 weight class.

McCown’s fourth place helped put Dunwoody in 21st in the team standings. Alec Sanders added a sixth place finish for the Jaguars in the 138 weight class.

Tucker’s Justin Carter picked up a sixth place finish to help Tucker slide inside the Top 30 at 29th.

Class 5A
Clarkston’s Ekoue Kangi led the Class 5A entries with a sixth place finish in the 138 weight class. Clarkston finished 22nd overall with 12 points and Southwest DeKalb was 25th (8.0 points).

Class 7A
Lakeside’s Micah Carrier (21-7) fell 8-3 in the bronze medal match to West Forsyth’s Daba Fofana to lead the Vikings to a 28th place finish in the Class 7A.

See link below for State Results: