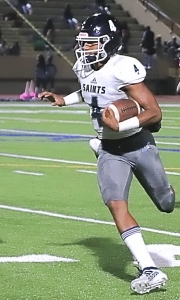 Cedar Grove quarterback Austin Smith threw two touchdowns and ran for another to lead the Saints to a 49-13 win over Benedictine to advance to the third round of the Class 3A statea football playoffs. (Photo by Mark Brock)

Fourteen points in the first six minutes of the game was too much for the Benedictine Cadets to overcome as the No. 2 ranked and defending Class 3A state champions Cedar Grove Saints rolled to a 49-13 win in a Class 3A second round state playoff game at Godfrey Stadium on Friday night.

Cedar Grove (10-2) kicked off to start the game and a hard hit forced a fumble the Saints recovered. Chavon Wright made the Cadets pay with a seven-yard TD run with just over a minute gone in the game and the Saints never trailed. Alvin Williams caught a screen pass from Justin Minitee for the two-point conversion just getting to the pylon to make it 8-0.

Just about five minutes later Austin Smith found Rashod Dubinion for a 11-yard scoring toss to up the lead to 14-0 heading into the second quarter.

Smith connected on his second touchdown pass of the game just about three minutes into the second quarter with a 22-yard strike to Sam Pittman. Louis Dominguez tacked on the PAT to make it 21-0.

Benedictine closed the gap to 21-7 with a two-yard rushing touchdown, but just before half Cedar Grove’s Latrelvin Blackamore stepped in front of a pass and returned the interception 52-yards for a touchdown. Rodjel Caine sent the Saints to the half up 28-7.

The Cadets picked up a 32-yard field goal from Gavin Stewart with eight minutes to go in the third quarter, but the Saints countered with a Dubinion eight-yard touchdown run. Caine added the PAT for a 35-10 Saints lead with four minutes left in the third period.

Benedictine got its last points of the night with a 44-yard field goal by Stewart with just under a minute left in the third quarter to go into the fourth quarter trailing 35-13.

Cedar Grove scored two touchdowns in a three-minute span of the fourth quarter. Smith ran 16 yards for one score with Domiguez adding the PAT for a 42-13 lead with 10 minutes to play in the game.

Three minutes later Wright, who finished with 14 carries for 164 yards, closed out the game like he opened it as he scored on a nine-yard run with seven minutes to play. Caine’s PAT made the final of 49-13.

The Saints defense  held Benedictine to 216 yards of offnese and was led by Isaiah Ratcliff with 13 tackles (5 solo, 8 assists) including two for a loss and N’Korian Newsom with 12 tackles (4 solo, 8 assists). Latrelvin Blackamore had two interceptions in the game including the touchdown return and Antonio Taylor added another. Adonijah Gree, Dominique Davis and Montego Johnson had one fumble recovery each in the game.

Cedar Grove’s win sets up a rematch of last year’s thrilling Class 3A state championship game won by the Saints on a last-minute touchdown pass against Peach County. Peach County (11-1) rolled to a 35-0 win over Calhoun on Friday to advance.

Peach County comes into the game as the No. 1 ranked team in Class 3A with its only loss coming at the hands of Houston County in overtime.

The Saints will host the game by virtue of the GHSA coin toss held on Thursday. Game is tentatively set for Godfrey Stadium on Friday, November 30 at 7:30 pm.