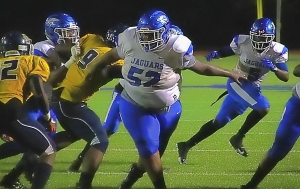 The DeKalb County playoffs flag is moving forward to the Sweet 16 of the state high school football playoffs in the hands of the No. 10 ranked Stephenson Jaguars and No. 2 Cedar Grove Saints.

Senior running back Deandre Jackson scored three touchdowns as he helped power the Stephenson Jaguars (10-1) to a 47-20 victory over Bradwell Institute on Friday night at Hallford Stadium as Stephenson moved on to the Class 6A state playoffs Sweet 16.

The win breaks a two-year run of first round losses for the Jaguars as they advance to host Allatoona (8-2-1) which defeated Gainesville 49-7 in the opening round.

Senior running back Ryan Ingram got the Jaguars off to a quick start with a 72-yard touchdown run and after Emmanual Rios added the extra point for an early 7-0 lead for Stephenson.

Jackson took over on the next two possessions scoring touchdowns on runs of one and 12 yards as the Jaguars took a 20-0 lead heading into the second quarter.

Bradwell scored a touchdown to trim the lead to 20-7 early in the second quarter, but the Jaguars answered on a 17-yard touchdown pass from Joseph Jackson to Quashaun Johnson. Rios hit his third PAT to make it 27-7.

A pair of field goals by Bradwell trimmed the lead to 27-13 before Jackson countered with a 17-yard touchdown run and the Rios PAT sent the Jaguars into the half up 34-13.

Trevon Ferrell opened the second half with a bang taking the opening kickoff 95 yards to the house. Rios hit the PAT to make it 41-13.

Johnson picked up his second touchdown of the game with a touchdown run to send the Jaguars into the fourth quarter up 47-13.

Bradwell picked up a fourth quarter touchdown for the final 47-20.

Stephenson is set to host Allatoona at Hallford Stadium on Friday night at 7:30. 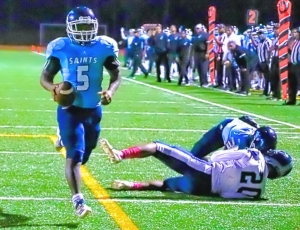 Cedar Grove’s Chavon Wright reached the endzone twice as the Saints rolled to a 36-7 win over Fannin County on Saturday in the first round of the Class 3A football state playoffs. (Photo by Mark Brock)

Class 3A
Cedar Grove 36, Fannin County 7
The No. 2 ranked Cedar Grove Saints rolled to a 30-0 lead at the half on the way to a 36-7 win over the Fannin County Rebels on Saturday night at Godfrey Stadium to advance to the Class 3A Sweet 16.

Chavon Wright got the Saints (9-2) off to a quick start as his 15-yard touchdown run and Louis Dominguez hit the PAT for the early 7-0 advantage for Cedar Grove.

Senior linebacker Isaiah Ratcliff sacked the Fannin quarterback in the endzone for a safety to extend the lead to 9-0.

Cedar Grove continued to build the lead before the end of the first quarter on a two-yard touchdown run by Rashod Dubinion. Rodjel Caine’s PAT made it 16-0 heading into the second quarter.

Langston White was the next Saint to step it up as he broke away on a 55-yard touchdown run. Dominguez hit the PAT to push the advantage to 23-0.

Wright extended the Saints lead to 30-0 at the half as he punched it in from four yards out. Caine tacked on the PAT.

Neither team scored in the third quarter and Fannin got on the scoreboard in the fourth period with a touchdown pass to trim the lead to 30-7.

Cedar Grove came back as backup quarterback Eric Harper scooted 49-yards for another Saints’ score for the final of 36-7.

The Class 3A Sweet 16 has Benedictine (8-3) traveling to DeKalb County to take on Cedar Grove on Friday night at 7:30 at Godfrey Stadium. The game is rematch of last year’s Class 3A Elite 8 game in Savannah as the Saints took a 55-0 road victory.

Class 5A
All four DeKalb entries into the Class 5A state playoffs fell on Friday night to have their seasons come to an end.

Trailing 3-0 at the half, the Panthers grabbed a short-lived 6-3 as Tommy Wright returned the opening kickoff of the second half 83 yards. The PAT was no good and the lead was 6-3.

Hiram answered with a 70-yard touchdown run by Jalen Townser to go back up 9-6 as the PAT was no good.

Hiram closed out the game by blocking a Panther punt that led to a touchdown and a 16-12 lead. Hiram then recovered the onside kick following the score and ran out the clock.