Cedar Grove kick Luis Dominguez kicks out of the old of Justin Minitee (19). The pair hope to team up a lot against Fannin County on Saturday night as they open up their Class 3A state title defense. (Photo by Mark Brock)

Class 3A defending state champions Cedar Grove Saints are one of eight DeKalb County football programs practicing for the first round of the high school football state playoffs this weekend.

Cedar Grove (8-2) enters the Class 3A playoffs as the Region 5-3A champ for the third consecutive season as they host the Fannin County Rebels (6-4) in first round action on Saturday night at 6:00 pm at Godfrey Stadium.

Senior running back Chavon Wright leads the Saints having rushed for 1,249 yards (124.9/gm) and 15 TDs on 156 carries this season. He has two of the 10 200-yard or more rushing games in DeKalb County this season topped by his 249-yard, two-touchdown performance in the Saints win over Westminster.

The No. 2 ranked Saints have won six consecutive since a 29-7 loss to Class 7A McEachern on September 13. During that span they have four shutouts and allowed just 10 points (to Pace) while scoring 250 (41.7 ppg).

Senior linebacker Isaiah Ratcliff leads the defense with over 100 tackles on the season with defensive end teammate Alvin Williams who has over 70 tackles, 10 sacks and 19 tackles for a loss.

Cedar Grove is coming off a 31-0 win over Stone Mountain, the team’s 24th consecutive Region 5-3A victory.

Fannin County is coming off a 42-21 loss to Greater Atlanta Christian and has lost three of their last four games heading into the playoffs. Treylyn Owensby leads the Rebels ground attack with 1,350 yards rushing and 14 touchdowns on 211 carries. Junior quarterback Luke Holloway has thrown for 1,338 yards and nine touchdowns and eight interceptions. 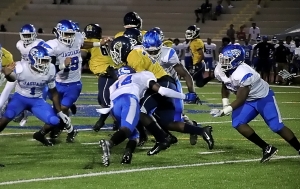 Stephenson’s Dantre Fitzgearld (14) has been a part of a Jaguars defense that has allowed just 7.0 points per game this season. He and his teammates look to shut down Bradwell Institute on Friday in the first round of the Class 6A state playoffs. (Photo by Mark Brock)

CLASS 6A
The No. 10 ranked Stephenson Jaguars (9-1) lead DeKalb rivals Tucker (6-4) and Martin Luther King Jr. (7-3) into the playoffs after winning their 10th region title with a 13-7 victory over Tucker for their second consecutive 4-6A crown.

Stephenson has won seven consecutive games since a heartbreaking 14-9 loss to Mt. Zion-Jonesboro to open region play. During the run the Jaguars have three shutouts and allowed just 34 points (4.9 ppg). They move on to host Bradwell Institute (3-6) in the first round on Friday at Hallford Stadium with kickoff set for 7:30 pm.

Juniors Tommy Smith (defensive lineman) and Dorian Helm (linebacker) lead the way with a combined tackles total of over 150. Senior defensive linemen Malichi Bailey and Viczaril Aloewede and senior linebacker Janirr Wade have combined for over 30 tackles for a loss.

Tucker enters as the No. 3 seed and travels to Region 2-6A No. 2 seed Glynn Academy (5-4) to take on the Terrors on Friday at 7:30 pm. Quaris Smith leads the Tiger ground attack with 764 yards rushing and 10 touchdowns. Myles Crawley (1,088 passing yards, 11 TDs) has teamed up with Isaiah Dunson for 34 passes for 596 yards and eight touchdowns.

The Martin Luther King Jr. Lions go on the road as the No. 4 seed in 4-6A to face Region 2-6A champ Richmond Hill (6-3) on Friday at 7:30 pm. Michael Fearn has taken over the lead role for the Lions on offense following the injury to Jacobi Haynes and has rushed for 909 yards and nine touchdowns. 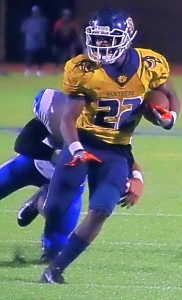 Southwest DeKalb running back Khoreem Miller (22) is getting ready to run against Hiram in the first round of the Class 5A state playoffs on Friday. (Photo by Mark Brock)

CLASS 5A
The No. 9/10 ranked Southwest DeKalb Panthers (9-1) is the No. 1 seed from Region 5-5A and are part of a four-team contingent from DeKalb heading into the Class 5A state playoffs this weekend.

Southwest DeKalb will host Hiram (5-5) in the opening round of the playoffs on Friday at Godfrey Stadium with kickoff set for 7:30 pm.

Junior quarterback Rion White has thrown for 1,563 yards and 17 touchdowns while rushing for 174 yards and seven more touchdowns to lead the Panthers’ offense.

Columbia lost a 28-18 decision to the Panthers in the Region 5-5A title game, but still gets to host this week as the No. 6 ranked Kell Longhorns (8-2) come to Avondale Stadium at 7:30 pm on Friday.

Octavious Griffin is the catalyst for the Eagles’ offense as the quarterback has thrown for 2,216 yards and 22 touchdowns while rushing for 521 and six touchdowns. Senior wide outs William Hemsley (29 catches, 602 yards, 10 TDs), Kentavious Ivey (25 catches, 592 yards, 5 TDs) and Anthony Dennis (31 catches, 586 yards, 5 TDs) account for almost 1,800 yards in the passing game and 20 touchdowns.

Senior defensive ends Nazir Stackhouse and Makale Cummings along with sophomore defensive end Joshua White have piled up over 53 tackles for a loss between them including 12. 5 sacks.

Lithonia travels to take on No. 3 ranked Rome (8-2) on Friday at 7:30 pm on Friday as the No. 3 seed out of Region 5-5A. The Bulldogs are led by quarterback Savion Lawson (985 yards passing, 12 TDs) and receiver Khalil Roach (645 yards receiving, 9 TDs) on offense. Junior linebacker Asmar Hassan leads the Lithonia defense with over 140 total tackles on the season.

Arabia Mountain goes on the road to face No. 1 ranked Carrollton (10-0) on Friday at 7:30 pm. Senior Jordan Barrow is the Rams’ top offensive threat with 404 yards receiving and five touchdowns on 7 receptions. Senior linebacker Chandler Martin (over 90 tackles) leads the defense while also leading the team in rushing with 338 yards and four touchdowns.