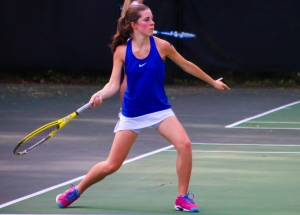 The Chamblee Lady Bulldogs and Dunwoody Wildcats both swept their Sweet 16 state tennis playoff matches by identical 3-0 scores to move into the state quarterfinals of their respective state tournaments.

Sophomore Neena Katauskas improved to 10-1 at No. 1 singles with a 6-0, 6-0 straight set victory over Decatur’s Maddie Coleman to start the rout for Chamblee against their local DeKalb rival Decatur Lady Bulldogs at Chamblee on Tuesday.

Senior Grace Pietkiewicz gave Chamblee a 2-0 lead with an identical 6-0, 6-0 straight set win over Decatur’s Kennedy Castle in the No. 2 singles match. Pietkiewicz improved to 17-1 on the season with the win.

The deciding match came at No. 1 doubles as the team of Madison Trinh and Madeline Meer cruised to a 6-1, 6-0 win over the Decatur duo of Sidney Bolcom and Zidia Gibson. The Chamblee pair improved to 6-2 on the season.

Chamblee is now 20-1 on the season and is 77-1 over the past three seasons. The Lady Bulldogs move on to face McIntosh, a 5-0 winner over Ola in the second round, in the Elite 8. The match is tentatively set for Sugar Creek Tennis Club on Thursday at 1:30 along with the Bulldogs facing McIntosh in the boys’ quarterfinal.

The Dunwoody Wildcats moved on to the Elite 8 in the Class 6A boys’ state playoffs with a 3-0 sweep of host Douglas County on Tuesday.

Quinn Wicklund also scored a 6-0, 6-0 sweep in his No. 3 singles matchup and Nathan Ward and Anthony Nelson teamed up at No. 1 doubles for another 6-0, 6-0 two-set sweep.

Dunwoody must travel to Lakeside-Evans in quarterfinal play later this week. A date and time will be set at a later date.