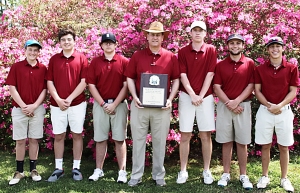 Senior Jack Kerdasha led the way for the Wildcats with his low medalist score of 78 (41-37) as the Wildcats had five of the Top 6 scores on the day.

Senior Christian Glass was second with a round of 80 (39-41) followed by Jackson Perry and Albert Rice both coming in at 85. Sophomore Jackson Ceo came in sixth with an 88.

Dunwoody’s Jack Kerdasha was the low medalist with a 78.

Coach Kurt Koeplin’s Chamblee Bulldogs were the runners-up for a second consecutive year as sophomore Alejandro Salinas shot a 99 as the last Bulldog on the course to clinch the two-stroke advantage over Lakeside.

Tucker junior Carson Cooper was seventh with his round of 93 while Druid Hills freshman Davis Hall, Lakeside senior Austin Garlow and Stone Mountain senior Micah Ashe rounded out the Top 10 all tied at 95.

Dunwoody made it 11 consecutive years atop the Championships standings, including a tie with Arabia Mountain in 2014, and gave Coach Doug Friedlander his 12th title. It is also Dunwoody’s 17th title overall. 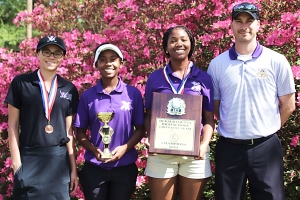 Senior Kaylee Cornelius put together a round of 89 (46-43) for a 10-stroke win over Arabia Mountain junior Miracle Goolsby (99). 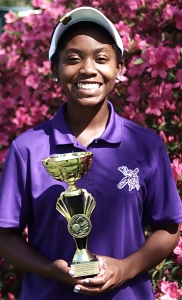 Lakeside’s Kaylee Cornelius was the girls’ low medalist with an 89.

Fifth place went to Jayla Cornelius via a card playoff as her and teammate Ivy Saddler tied at 106 on the day.

Chamblee freshman Olivia Li finished seventh with a 119 and Dunwoody junior Gabby Lowe was eighth with a 127.

Lakeside’s title moved the Lady Vikings into a tie with Dunwoody with six titles each. Chamblee owns the only other title in the history of the tournament winning in 2006. Arabia Mountain matched its best finish as the Lady Rams finished second for the third time.

See link below for full results from the 2019 DCSD County Golf Championships: