Several DeKalb Baseball Teams in the Thick of Region Races 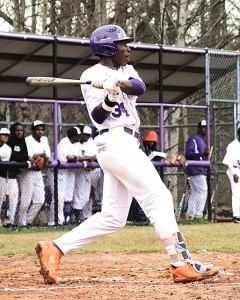 Coach Eric Hoxie’s Arabia Mountain Rams remained in the thick of the hunt for another regular season Region 5-AAAAA crown, rolling past Miller Grove (13-3) March 25 and Miller Grove (16-4) again March 27 in moving to 7-1 in the league and 9-3 overall.

Coach Samuel Marion’s Lithonia Bulldogs continued to rise to the top of the Region 5-AAAAA standings as well, sweeping Columbia twice by the scores of 7-4 March 26 and 15-2 March 27 in moving to 5-1 in the league and 8-5 overall.

Coach Timothy Jones and the Stephenson Jaguars are fighting for a Region 4-AAAAAA crown and improved their chances by besting Morrow (5-1) March 27 and Morrow (11-3) again March 29 to move to 7-2 in the league and 12-2 overall.

Junior Shane Daley turned in a strong offensive outing for Stephenson in an 11-3 victory over Morrow March 27. Daley went 2-2 with four RBI to pace the Jaguars.

Coach Matt Masce’s Tucker Tigers rounded out the group of local squads with 2-0 records from last week, slipping past Lovejoy twice by the scores of 4-3 March 27 and 7-6 March 29 to improve to 9-1-1 in Region 4-AAAAAA and 10-3-1 overall. The 9-1-1 mark is good enough for first place in the league.

Senior Max Stephens tossed a one-hitter for Chamblee in an 11-0 blanking of Clarkston March 25. Stephens struck out six and allowed only one hit in three scoreless innings. Seniors Davis Jenkins (2-2; 3 RBI; 1 SB) and John Principe (2-2; 2 RS; 1 RBI) collected multiple hits in the contest.

Senior Anthony Terrell went 1-2 with a double and one RBI in Clarkston’s 11-1 loss to Chamblee March 27. Sophomore Brian Morris turned in five solid innings in defeat on the mound for the Angoras in the contest, striking out two and allowing five earned runs, seven hits and two walks.

Sophomore Joseph Garcia shined in defeat as Lakeside dropped a 5-0 decision to Brookwood March 25. Garcia went the full six innings on the mound, striking out one, walking two and allowing only eight hits and two earned runs. Junior Deatric Alexander finished 2-3 with one run scored for Lakeside in an 11-1 loss to Collins Hill March 28.

See links below for Week 7 Varsity and JV Results/Standings: