Seven DeKalb Teams Begin Road to the Benz this Weekend 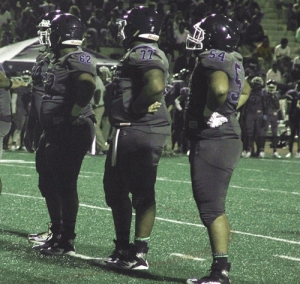 Offensive lineman (l-r) Michael Brooks (62), Brandon Hall (77) and Quentin Eagle (54) have paved the way to the Saints’ rushing attack that has piled up over 1,800 yards on the ground this season. (Photo by Mark Brock)

The Georgia High School State Playoffs get underway this week with seven DeKalb teams preparing for first round contests in their respective classifications.

Coach Jermaine Smith’s No. 2 ranked and two-time Region 5-3A champs Cedar Grove Saints (9-1) open by hosting Region 8 No. 4 seed Hart County (4-6) on Friday at Avondale Stadium in the first round of the Class 3A state playoffs at 7:30 pm.

Cedar Grove won the 2016 Class 3A state title and has reached the state semifinals three consecutive years while compiling a 37-5-1 overall record which goes to 46-6-1 with this year’s 9-1 record. The Saints are 25-1 in region play during the past four seasons including a streak of 18 consecutive wins since a loss to Westminster in 2016.

Hart County is facing Cedar Grove for the first time ever and the Saints are looking to capture the program’s 300th victory (299-193-4) when they take the field on Friday.

Junior running back Chavon Wright has returned from injury and had a pair of touchdowns in the Saints final regular season game (71-0 over Stone Mountain). Wright is one of several banged up Saints who have returned to the lineup as the Saints prepare for another playoff run.

The offense has a two-headed quarterback attack in senior Kendall Boney and sophomore Austin Smith who have combined for over 1,500 yards passing and 26 touchdowns on the season and another 373 yards rushing and 7 touchdowns.

Senior Robert Jones has been the leading rusher with 700 yards and 7 touchdowns on the season and freshman Rashad Dubinion has over 300 yards and 3 touchdowns.

Hart County is coming off a tough 35-34 overtime loss to Morgan County that dropped the Bulldogs to the No. 4 seed. 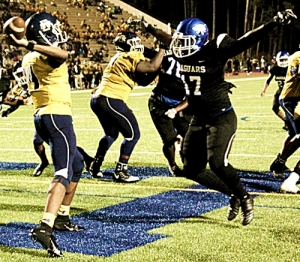 CLASS 6A STATE PLAYOFFS
The No. 4 ranked Stephenson Jaguars and No. 9 ranked Tucker Tigers both play host in their first round Class 6A state playoff games on Friday.

The Jaguars are coming off a big 30-24 win over Tucker to claim the program’s ninth region title and first since 2015. The face the 2017 Class 6A runner-up in Coffee who comes in off a 38-7 loss to No. 1 Lee County and has lost three of their last four games.

Stephenson and Coffee are meeting for the third time in the playoffs having split the first two meetings Stephenson upset Coffee 17-7 in the 2006 Sweet 16 and Coffee returned the favor in 2008 with a 17-14 upset win in the first round. Stephenson is making its 19th consecutive playoff appearance.

The Jaguars are led by a trio of running backs in Jevon Goff, Ryan Ingram and Donovan Moorer who have combined for over 1,700 yards and 25 touchdowns on the season. Senior defensive lineman Jamal Andrews has 68 tackles (11 for loss, 4 sacks), senior linebacker Tra’ Wilkins has 67 tackles (9 for a loss and 4 sacks) and junior defensive end Janirr Wade has 47 tackles (10 for loss and 3 sacks).

Tucker (7-3) plays host to No. 5 ranked Northside of Warner Robins (5-5) at 7:30 pm on Friday at Adams Stadium. The two teams are meeting for the sixth time in the state playoffs with Tucker holding a 3-2 edge. 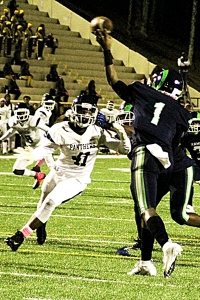 Southwest DeKalb’s John Grant (41) and Arabia Mountain’s Bryson Williams (1) would love to meet on the field again this fall as it would mean a state championship was on the line. (Photo by Mark Brock)

CLASS 5A STATE PLAYOFFS
DeKalb has four entries in the Class 5A state playoffs led by No. 7 ranked Southwest DeKalb along with Arabia Mountain, Lithonia and Miller Grove.

Southwest DeKalb (10-0) enjoyed its eighth undefeated regular season in school history and first since 1999 with a 13-6 win over rival Columbia last weekend and head into the playoffs to host Loganville (4-6) in a 7:30 pm contest on Friday at Godfrey Stadium.

The Panthers are making a third consecutive appearance in the state playoffs and are vying to advance past last year’s second round appearance. Coach Damien Wimes is 18-4 in his two years at helm of his alma mater and helped collect the school’s first region title since 2009 and 17th overall.

Arabia Mountain (6-4) is also making a third consecutive state playoff appearance under Coach Stanley Pritchett as the Rams will play host to Region 8 No. 3 seed Clarke Central (6-4) in a 7:30 pm contest on Saturday (Nov. 10) at Godfrey Stadium.

The Rams advanced as the No. 2 seed following a 37-0 shutout of region foe Lithonia last weekend. Arabia Mountain has advanced to the Sweet 16 the past two seasons.

Lithonia (6-4) goes on the road as the No. 3 seed traveling to Cedar Shoals (7-3) on Friday for the 7:30 kickoff. It is the Bulldogs first playoff since the 2016 season and its first head-to-head matchup with Cedar Shoals.

Miller Grove (3-7) under first year coach Lee Hannah is in the playoffs for a third consecutive season. The Wolverines are winless in their two trips to the playoffs and have to go on the road to No. 2 ranked Buford (8-2) on Friday at 7:30 pm