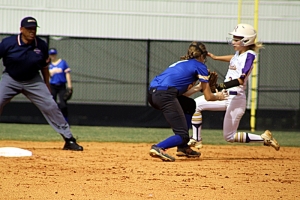 Chamblee’s Rachel Lovejoy tags out a Villa Rica base runner on a steal attempt on a nice throw by catcher Ansley Mepham. (Photo by Mark Brock)

Villa Rica rallied for four runs in the top of the seventh inning to defeat the Chamblee Lady Bulldogs 8-6 on the way to a two-game sweep of their Class 5A State Playoffs second round best-of-three series at Chamblee on Wednesday.

Trailing 4-0 in the bottom of the fifth, the Lady Bulldogs (18-8) rallied with four runs to tie the game as Margaret Axelson, Brooke George and Rachel Lovejoy drove in runs in the inning.

Axelson got a big hit into left field in the bottom of the sixth to drive in McKenzie Folsom for a 5-4 Chamblee lead heading to the top of seventh.

Reagan Gunter doubled to lead off the seventh and Madi Langford, who had homered earlier in the game, was intentionally walked. Following a sacrifice bunt by Mallorie Sitton, Marley Couch singled into center driving in both runners to give Villa Rica a 6-5 lead. Villa Rica added two more insurance runs to head to the bottom of the seventh up 8-5.

Grace Brown’s groundout scored Lovejoy as the Lady Bulldogs got the tying run to the plate with two outs. Villa Rica pitcher Kali Barbour got the final out with a pop up to short to secure the win for Villa Rica (21-9).

The deciding game had Chamblee with a 3-1 lead in the top of the second as Ansley Mepham, Folsom and Axelson all drove in runs after falling behind 1-0 in the bottom of the first.

Villa Rica came back to tie the game with two runs in the third on the way to an 8-3 victory to clinch the series two games to none.

Chamblee’s season comes to an end in the second round of the Class 5A state playoffs for the second consecutive season.