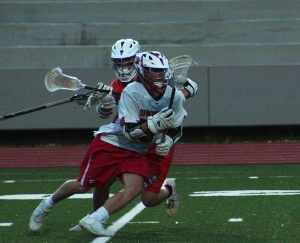 Dunwoody’s Sean Fox cuts towards the goal on the way to one of his three scores in the 9-5 victory over the Parkview Panthers. (Photo by Mark Brock)

Hardnosed defense proved to be the winning formula for the Dunwoody Wildcats as they rallied from a 4-1 deficit to defeat Parkview 9-5 on the way to securing the program’s first home playoff game on May 2 against the Region 3-6A-7A No. 3 entry.

Dunwoody’s Nick Fazzone converted a nice assist from teammate Zach Rossing into a goal with 9:46 left in the first half to cut the lead to 3-1.

That was a big turning point as the Wildcats (9-4, 5-1) turned up the heat defensively with some hard checks and packing it in out front of the goal to limit Parkview’s opportunities at easy shots. Goalie Adam Hydrick stepped up his play as well making 16 saves in the game after giving up the three quick goals in the first quarter.

Parkview scored just one more goal in the final 32:16 of the game while the Wildcats would put eight on the score board.

Sean Fox scored on a pass from Carson Bregitzer with 6:09 left in the first half and Bregitzer was rewarded for his efforts with a nice pass from Drew Koehler trim the lead to 4-3 with 5:54 left in the half. Dunwoody had a player called for being in the crease to disallow what had looked like the tying goal with 3:45 to play.

Parkview would go into the half holding a 4-3 advantage.

Third quarter goals from Rossing and Connor Brogdon put the Wildcats ahead 5-4 with 5:04 left in the period. Peyton Haislip would find Brunson open for a goal as Parkview knotted the game at 5-5 heading into the fourth quarter. But the Wildcat defense had set the tone holding Parkview scoreless for 19 minutes to get back into the game.

Dunwoody scored four unanswered goals in the fourth quarter with Fox scoring two to get the hat trick in the game. Fox opened the fourth quarter driving the middle of the Parkview defense for a goal (11:05) and then slinging a 15-yard bullet (6:42) past goalie Devin Kotowski.

The Wildcats more than likely will face North Paulding in the opening round of the Class 7A-6A state playoffs. 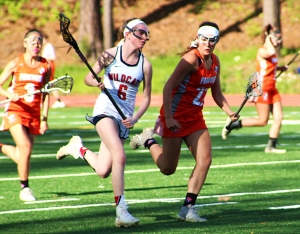 (G) Parkview 12, Dunwoody 3
The girls’ region game was not as close as the boys’ contest as Parkview jumped out to a 5-1 halftime lead on the way to a 12-3 win over the Lady Wildcats

Sydney Trammell scored early in the second half to make it 6-1 in favor of the Panthers before Dunwoody’s Phoebe ringers used a penalty call on Parkview to score and make it a 6-2 game with 22:22 to play.

Ellie Levy finished out the Dunwoody scoring with a goal at the 10:11 mark that stopped a 4-0 run by Parkview and made the score 10-3.