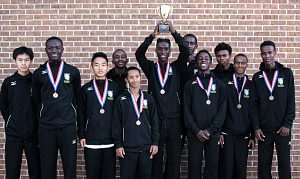 The Clarkston Angoras finished in the Top 3 at state for the fifth consecutive season.

The Clarkston Angoras and Lakeside Vikings made appearances on the podium at their respective cross country state meets last Friday at Carrollton to lead the 17 DeKalb County entries to compete on the weekend.

Clarkston, the three-time defending Class 5A state champion, stretched its Top 3 finish streak to five consecutive seasons with a third place finish in Class 5A on Friday at Carrollton.

Chamblee finished 13th as a team led by Charles Holt who went under 18 minutes at 17:57.65 to finish 32nd. Southwest DeKalb was 30th and Arabia Mountain was 32nd in the team standings. 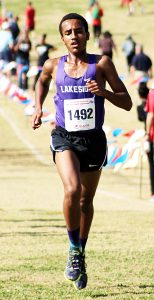 Lakeside’s Mikias Mekonen led the Vikings to a fourth place finish in the Class 7A State Cross Country Meet. (Photo by Mark Brock)

Class 7A
The Lakeside Vikings finished in the Top 5 for the first time since a fifth place finish in 2010 as they took fourth in the Class 7A Boys’ State Meet on Friday at Carrollton.

It was the best finish for the Vikings since finishing second in 2009 and was the 13th time in the past 14 seasons for the Vikings to finish in the Top 10. It was also the Vikings 21st Top 5 finish which includes five state titles.

Class 6A
Dunwoody stood out in the Class 6A State Meet led by Lady Wildcat Samantha Cameron who made the podium with a sixth place finish overall at Carrollton on Saturday.

Cameron, who was the Class 5A state champion, put up a time of 20:18.52 to lead Dunwoody to its ninth consecutive Top 10 finish and 11th overall.

Max Mowrer was the top runner in the Class 6A meet for DeKalb as he ran an excellent time of 17:32.72 to finish 20th overall as an individual regional qualifier from Dunwoody.

The Tucker Tigers finished 20th in the team standings led by Abdilnur Tiroro who came in 44th with a time of 18:01.27. Martin Luther King Jr. made its first appearance in the state meet and finished 26th while Stephenson came in 28th.

Class 4A
The Druid Hills Lady Red Devils finished in the Top 10 for the second consecutive season with a ninth place overall in the Class 4A girls’ team standings on Saturday at Carrollton.

Class 3A
The Stone Mountain Pirates were the only team to run at the Class 3A State Meet on Saturday at Carrollton and finished 25th overall.