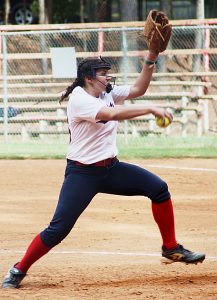 Dunwoody pitcher Samantha Moss and her Lady Wildcat teammates have been on a roll with 14 wins in last 15 games. (Photo by Mark Brock)

Four of the teams come from Region 5-5A led by region champ Arabia Mountain (21-4) and region runner-up Chamblee (20-5-1) who host Class 5A first round best-of-three series beginning on Wednesday.

Arabia Mountain enters the 2017 playoffs having matched last season’s and the school record of 21 wins and a second consecutive region title. The Lady Rams swept Kell last year to win DCSD’s first softball best-of-three series since it was instituted in 2009.

A host role in the first round against Region 6-5A No. 4 seed Riverwood (10-16) gives Arabia Mountain the opportunity to break the school’s season record win total of 21 and a chance to advance to the second round for the second consecutive season under Coach Eric Hoxie. Hoxie picked up his 100th career victory at Arabia Mountain this season and is now 118-62 overall in eight seasons.

The Chamblee Lady Bulldogs (20-5-1) host Lithia Springs (19-9-1) in the Class 5A opening round of the state playoffs. Chamblee can give third-year Coach Alan Loper his 50th career victory with a series win. The Lady Bulldogs have improved by four wins each of the last two season and the 20 wins this season is the most since a 22-8 year directed by Elizabeth Spaulding in 2001.

Lithia Springs and Chamblee played twice in the regular season with Lithia Springs winning one game and the other game ending in a tie. The teams open the series at 2:00 pm on Wednesday with a doubleheader.

Coach Bernice Foreman is in her 17th season at Southwest DeKalb and her team presented her with her 200th career victory this season to raise her career tally to 206-131.

The Lady Panthers now go in search of the illusive playoff win as they head up the road to Decatur (19-8) to face the Region 6 champs with a doubleheader set for 4:00 pm on Wednesday.

The final Class 5A participant from DeKalb is the Miller Grove Lady Wolverines (14-6) who travel to North Springs (10-13) for a 4:00 pm doubleheader on Wednesday.

Miller Grove picked up two of DeKalb’s five game victories since 2009 when reaching the state playoffs in 2013 and 2014 and forcing game three’s in both appearances. The Lady Wolverines missed the playoffs in 2015, but returned last season losing in the first round to Woodland of Cartersville.

Class 6A
Stephenson and Dunwoody are making first round appearances to represent DCSD in the Class 6A state playoffs beginning on Friday.

The Stephenson Lady Jaguars (15-6-1) revisit their first ever playoff appearance of as they host Heritage of Conyers (15-12) which defeated Stephenson in 2013. The Jags have made five consecutive playoffs and are still looking for a win as they host the opening round.

Coach Marco Jackson picked up his 100th career victory this season, his 8th at Stephenson, to improve to 104-70-1. The best-of-three begins with a doubleheader on Friday at Stephenson beginning at 3:00 pm

Dunwoody which holds the only two DCSD softball state champions (1994, 1996) is 16-18 overall in state playoff competition, but still in search of a best-of-three series first round victory.

Coach Kerry Brown sits at 224-187, tops in DeKalb County softball coaching wins, entering the playoffs needing just one victory for her 225th in her 10th season at the helm of the Lady Wildcats’ program.

Class 4A
Druid Hills makes the program’s second ever playoff appearance as the Lady Devils (8-11) travel to Thomson (17-7) on Wednesday for a 4:30 pm doubleheader to open the Class 4A state playoffs.

The 2015 season marked Druid Hills’ first ever playoff appearance. Druid Hills is the No. 4 seed out of Region 4-4A.

The Lady Saints are making their fourth consecutive trip to the state playoffs.