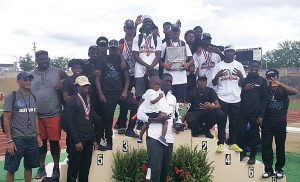 The Cedar Grove Saints tied a record held by Druid Hills to become just the second DeKalb County track team to win three consecutive state titles with a 71-66 win over Westminster in the Class 3A State Track Meet at Hugh Mills Stadium in Albany.

The 4×400 meter relay team of Terrence Lewin, DeAnthony Moore, Israel Spivey and Mathew Young closed out an improbable rally with gold medal a tight win over Monroe (Albany) 3:19.89 to 3:20.18 to vault into first place in the team standings. It was the fifth consecutive season the Saints won the relay event and eight in the last nine years, missing out in 2012.

The Saints needed just a third place finish in the 4×400 relay to snatch the title and continued their dominance in the event with the title winning gold medal.

Haselwood’s time of 14.52 to win the 110 meter high hurdles gave DeKalb its first gold medal in the event since 2012 when Martin Luther King Jr.’s Jordan Moore won the Class 5A state title in the event.

The state title was Cedar Grove’s eighth title overall and marks the first time in school history for the Saints to claim two state titles in the same school year. The Saints won their first ever Class 3A state football championship this past fall also under Coach Jermaine Smith.

Class 5A at Carrollton 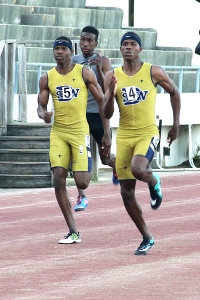 Southwest DeKalb’s Terry and Terryon Conwell combined for 3 individual gold medals for the second consecutive season at the Class 5A State Track and Field Championships. (Photo by Mark Brock)

The Southwest DeKalb Panthers two-year reign as the Class 5A boys’ state champs came to an end at Carrollton as Cedar Shoals upended the defending champs 71-51.

Despite coming up short the Panthers twin duo of Terryon and Terry Conwell combined for three gold medals and one silver on the day.

Chamblee was 33rd with four points.

Arabia Mountain was 16th with 14 points led by sophomore Patra Williams’ gold in the high jump (5-4.00). Chamblee was 25th with 7 points.

Class 6A at Carrollton
The Tucker Lady Tigers finished the season with a fifth place finish in the Class 6A state meet at Carrollton.

Class 7A at Rome
The Lakeside Vikings finished in the Top 15 at the Class 7A boys’ state meet led by a pair of silver medals by sophomore Brian Herron.

Morgan Mihalis picked up a bronze in the 3200 meter run to help Lakeside to a 24th place finish (6) in the girls’ meet.