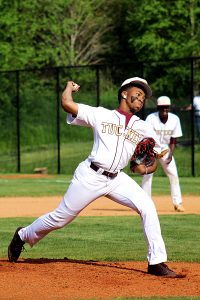 Coach Vince Byams and the Region 4-AAAAAA champion Tigers enter the state playoffs this week on a 20-game winning streak and are 24-6 overall.

Coach Chan English and the Dunwoody Wildcats may have been the best 13-16 team in the state this year. The Wildcats bested region champion Pope (8-4) April 17 and Centennial (9-4) April 19 to finish in a five-way tied for second in the final 7-AAAAAA standings at 9-7.

Dunwoody, however, fell short of a state playoff berth in the tie-breaker process.

Senior Drashon Walker tossed a no-hitter for Clarkston in a 17-0 triumph over Cross Keys April 20, striking out five. Walker also went 2-3 with two runs scored and one RBI to lead the offensive charge.