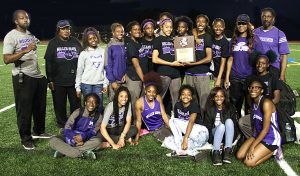 The Miller Grove Lady Wolverines won four events during Monday’s track title on the way to a 91-75 win over Arabia Mountain to capture the program’s second ever DCSD Girls’ Track and Field Championships title at Godfrey Stadium earlier this week.

Miller Grove was lurking 27 points back in sixth place behind two-time defending champion Chamblee after the first day of competition and made a statement in the first event of the track finals.

The 4×100 relay team of Chance Barnes, Tacari Demery, Zariyah Kitchens and Jakeeyah Seymour lowered their prelim winning time by .15 seconds to clock a 47.29 to nip Arabia Mountain for the first gold of the day and set the stage for their rally to the title.

Following a break while the boys ran the 1600 meter run, Kitchens stepped back onto the track and promptly beat her prelim winning time in the 400 meter dash by .44 seconds lowering it to 56.01 for the gold medal.

Arabia Mountain had put together a silver in the 4×100 relay and a bronze in the 400 meter run to collect 19 points to move into second with the 51 points just behind Chamblee’s 54. Miller Grove had crept into fourth with 39 points.

Emoni Coleman picked up her second gold medal of the meet with a victory in the 800 meter run by 11 seconds with her time of 2:14.98. Teammate Lauryn Griggs grabbed bronze (2:26.71) as the Wolverines continued to move up the standings and into first place just ahead of Arabia Mountain 67-58. 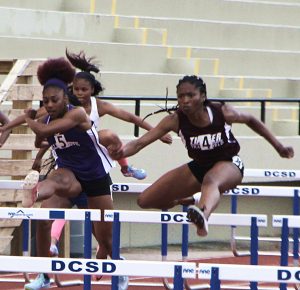 Neither team had an entry in the 3200 meter run won by Chamblee’s Beining Xiao (11:19.90) to solidify the defending champions a third place finish with 66 points just ahead of Tucker with 64.

The 4×400 meter relay was the final event of the day and Miller Grove could not lose the title as Arabia Mountain had just one entry in the event.

Miller Grove made no doubt as to who would be the winner as the team of Emoni Coleman, Zariyah Kitchens, Chance Barnes and Nadiyah Swan shaved 10 seconds off their third place prelim time with a 3:53.63 to claim the gold over Arabia Mountain.

Tucker’s fourth place finish was fueled by Kaylah Lumsden who claimed the title of fastest girl on the day by sweeping the 100 (11.90) and 200 (24.55) meter dashes. Antonia Frazier added 10 more points and a gold to Tucker’s total with a 14.45 time to capture the 100 meter hurdles.

Tahleebah Martin of M.L. King won the 300 meter hurdles in a time of 45.57 to round out the gold medals. 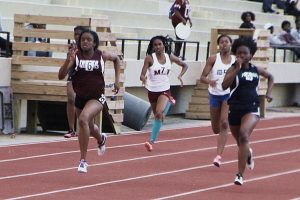 Arabia Mountain was in a solid third place with 32 points led by Patra Williams win in the high jump (5-05.00) and Lakeside followed in fourth with 24 points while Tucker was just behind in fifth with 22 points led by Antonia Frazier’s win in the long jump (18-3.5).

Emoni Coleman’s win in the 1600-meter run (5:12.98) along with some good preliminary runs has Miller Grove in shape for the run to the title heading into the track finals.